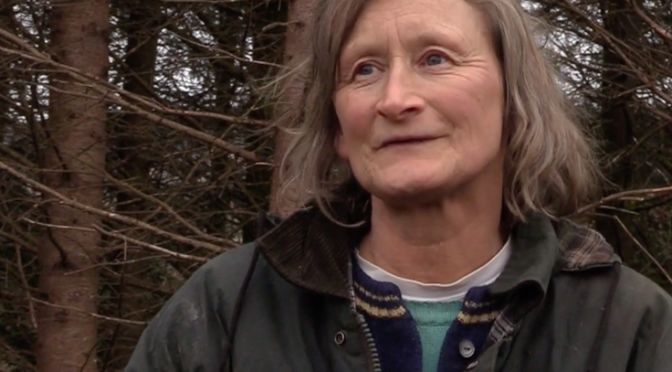 Protector of the Environment

The sawdust on Sionad Jones’ clothes was suspicious enough, but when Garda Fintan Coffey saw the chainsaw in her green Toyota Starlet, he knew he’d found what he was looking for.

He’d been called to Maughnaclea, Kealkill to investigate the alleged illegal felling of a number of spruce trees, the ringmarking of other spruce trees (where a notch is cut in the bark of the tree around the entire trunk leading to its death) and the theft of felled logs.

Sionad, who is 61 and originally from Wales, admitting to felling the trees, but has denied all criminal damages without a lawful excuse.

She defines herself as a ‘conscientious protector of the environment’, and blames Coillte, a forestry management company that looks after 7% of Ireland’s lands, for mismanagement of the forests and the decline of biodiversity in County Cork.

The Sitka spruce, which are not native, spread as they grow and their interlinking branches block sunlight from reaching forest floors. Sionad felled 250 Sitka spruce trees and planted 46 broadleaf trees in their place. Trees like birch, hazel, oak alder, crab apple and rowan are native to Ireland and help to increase the biodiversity of the area.

As reported by the Irish Times, Ms. Jones said ‘Sitka Spruce plantations were devoid of plant and animal life with plants such as orchids and bilberry plants no longer able to survive there while insect and bird life was also negatively impacted’.

‘I’ve been managing the forest for at least 20 years because of Coillte’s neglect of its duties to the Irish people. I took over as a concerned citizen who has a duty of care to ensure biodiversity.’

Sionad has been found not guilty of felling the trees, but was found guilty of theft of the felled logs with sentenced adjourned until October.