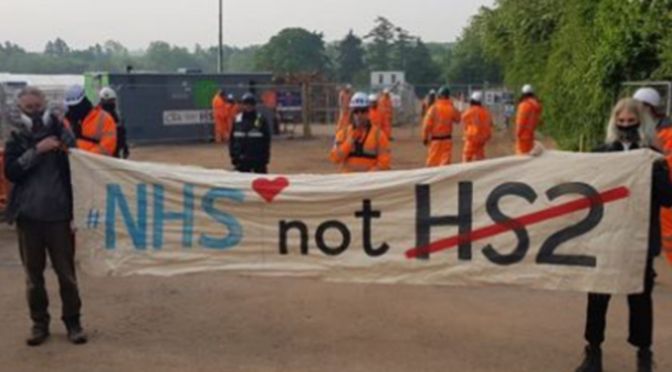 Protesting in the Age of COVID

How far would you go for a cause you believed in? These HS2 protesters answer that question.

The message from the government for ordinary citizens has been clear from the beginning: Stay home, protect the NHS, save lives. But for the local residents and activists who oppose HS2 – the high-speed railway linking London and Birmingham which has been mismanaged, delayed and over budget at every step – they have sheltered in place among the forests they love and hope to save.

Phil Mackie, reporting for the BBC from Crackley Woods, near Kenilworth, Warwickshire, related how the makeshift camp ‘consists of a roundhouse built from hay bales and covered in tarpaulin, a field kitchen, about 20 small tents and a handful of camper-vans.’

Many of the members of the camp have spent the lockdown – six weeks and counting – in the treetops, trying to stop the HS2 contractors from felling trees. Some have been arrested. He spoke to one of the protestors, a former tree surgeon, who told him:

‘People’s democratic right to protest and have their say has been taken away at this time.’

As ordinary people, civil disobedience and the disruption it causes are often the only actions we have in making our voices heard. And governments around the world are using COVID-19 to roll back environmental protections or to push ahead with environmentally destructive projects in the absence of public demonstrations.

As just one example, Bill McKibben wrote in The Guardian at the beginning of April about Big Oil trying to jump-start the controversial Keystone XL pipeline, supported by states quickly adopting laws ‘making it a felony to protest “critical infrastructure” like pipelines.’

That meant 30,000 people trained in non-violent civil disobedience to block construction could be charged with felonies for protesting.

He goes on to say:

‘It is difficult to escape the conclusion that the oil industry is acting decisively now because it knows this is the one moment when protesters can’t make themselves heard. Those 30,000 trained volunteers represent one of the great nonviolent armies in American history, willing to suffer to protect the planet – but they are moral human beings who will not risk taking microbes into prisons with them, and endanger prisoners crowded together in impossible conditions.’

Activists argue that it is hard to understand how projects like these – damaging to the environment, to biodiversity and to people – can be marked ‘essential work’ when we should be focusing all our people, resources and effort to support the true front-line workers like the NHS, grocery stores, delivery drivers and farmers.

With 108 ancient woodlands under threat – home to over 250 species, some of which are endangered – the protestors are working to keep pressure on the government in the hope that they will scrap the project later this year.

While lockdown and social distancing measures may make physical demonstrations difficult for the majority of us, we can still make our voices heard online. Show your support by joining the Fridays for Future #ClimateStrikeOnline.

As Greta said at the beginning of lockdown:

‘The climate and ecological crisis is the biggest crisis humanity has ever faced but for now (of course depending on where you live) we’ll have to find new ways to create public awareness & advocate for change that don’t involve too big crowds – listen to local authorities.

So keep your numbers low but your spirits high and let’s take one week at the time.’