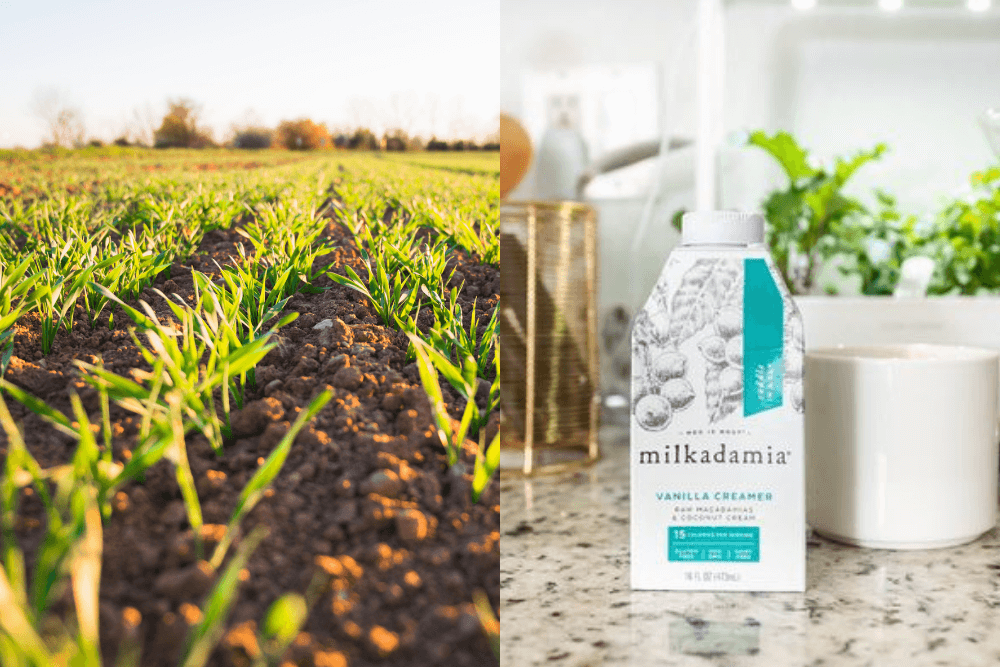 Can Regenerative Agriculture Fix Our Food System and Save Our Planet? Milkadamia Is Betting On It

Going small may just be the big solution to better farming and reversing climate change.

“Regenerative agriculture” doesn’t exactly roll off the tongue. It’s not as sexy as the ubiquitous “sustainable” or as succinct as “vegan.” But for the macadamia-based dairy alternative brand Milkadamia, it’s as important, more so, even, than its better-known bedfellows.

Milkadamia is the brainchild of Jim Richards, an Australian who grew up on his family’s macadamia orchards. As the dairy-alternatives industry grew, Richards saw an opportunity for his beloved macadamia nut.

The company emerged as shelf-stable dairy-free milk in 2016, moving to refrigerated, and expanding recently into butter, creamers, and macadamia oils.

Milkadamia has taken a hard stance on issues like palm oil, an ingredient common in dairy-free products and linked to deforestation throughout Southeast Asia. Now, it’s pushing one of its other commitments to the forefront, hoping to educate consumers on the benefits of regenerative agriculture.

Milkadamia always saw itself as another way to bring about a sea change to the dairy industry—displacing conventional cow’s milk by offering consumers another alternative meant to move the planet toward a more sustainable agricultural system.

“Wellness no longer means my personal nutrition,” Richards says. “We can’t be well in isolation when the planet is suffering.”

Part of that planetary suffering comes from one of our biggest industries: agriculture. The obvious culprits are meat, eggs, and dairy—livestock production is responsible for nearly 15 percent of all emissions, but some estimates put it even higher.

But conventional crop-based agriculture isn’t doing much better. Traditional methods like clear-cutting, monocropping, and heavy applications of agrochemicals deplete and pollute resources, render soil useless after a few growing seasons, and are among the largest contributors to deforestation and carbon emissions.

There’s a simple solution to all of those issues, though: regenerative agriculture. The term covers a range of techniques like no-till cultivation, growing cover crops, and crop rotation. Practices like these keep carbon in the soil, making it a vital tool in the battle against climate change. All plants remove carbon; they absorb it through photosynthesis and move it into the soil.

According to the Climate Reality Project, regenerative agriculture practices increase soil biodiversity and organic matter, “leading to more resilient soils that can better withstand climate change impacts like flooding and drought. Healthy soils beget strong yields and nutrient-rich crops. It also diminishes erosion and runoff, leading to improved water quality on and off the farm.”

For Richards and Milkadamia, supporting regenerative farming practices is a no-brainer.

“If a mere 20% of all the world’s cultivated land moved to regenerative farming, it could store enough carbon to halt then reverse the buildup of Co2,” Richards says. “We, the world’s food purchasers, are the only power enabled to force change on a scale that alters the predicted trajectory of the health of our planet.”

Richards emphasizes that regenerative farming produces healthier, more nutrient-dense food, too. And it can lead to higher crop yields, something conventional and genetically modified farming often promise but fail to deliver on. “Continual increases in soil quality and quantity allow productivity on these farms to swell,” he says.

It all comes down to the consumer, and remembering that the issues that threaten us aren’t external. “We are the change we seek, the hope we need,” says Richards.

“To create enough food without destroying our natural resources and health, we need to embrace regenerative agriculture on a significant scale.”