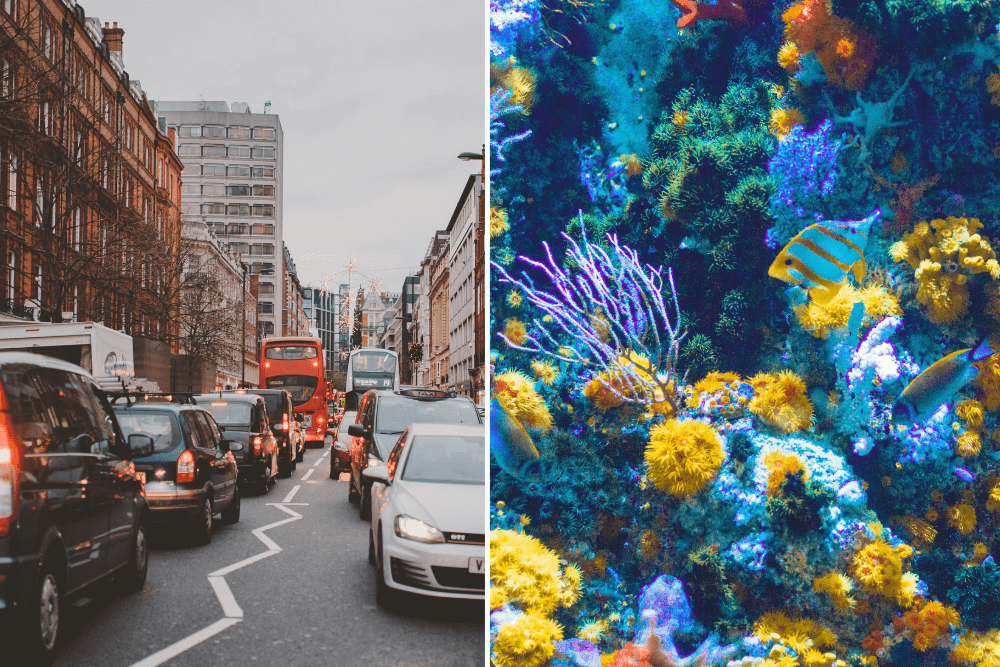 Bringing An End to Plastic Pollution, From City to Sea

‘As citizens, we’re not going to have the wool pulled over our eyes. We know that plastic is devastating for the planet…’

Natalie Fee is the founder of City to Sea, an organisation dedicated to stopping plastic pollution at its source. She wears many hats – as an environmental campaigner, speaker, author (of the best-selling How to Save the World For Free) and occasional music video star (check out the music video we made together!).

The award-winning campaigns that City to Sea have organised have had extraordinary results, whether that’s to stop people from flushing wet wipes down the loo, to switch from plastic to paper cotton bud sticks or to rethink periods and the products they use.

We sat down with her to learn more about how City to Sea are navigating the COVID crisis, what her tips are for getting trid of plastic, and how she stays resilient.

When Nat came across the trailer for The Albatross – a visually stunning story of albatross chicks dying from eating plastic pollution – she knew she had to take action. ‘It was so extraordinarily heart wrenching to watch. It was the first time I’d felt deep grief for the state of our planet. And it was that scale of feeling that I experienced that made me realise that I had to do something. It felt like a calling…’

Natalie made the point that the big challenges facing us – climate breakdown, air pollution, deforestation – can feel overwhelming and distant, the problem of plastic pollution is right in front of us, in our hands. It’s easy for us to rally around it as the first step toward an environmentalist mindset. ‘Plastic is something everyone could get behind in the UK.’

The plastic industry is taking advantage of the crisis and trying hard to reverse the single-use plastic bans that are happening around the world. Luckily the European Union is standing strong and the UK’s bans have only been delayed. Natalie believes the public is still on-board with pushing back against the plastic industry.

‘As citizens, we’re not going to have the wool pulled over our eyes. We know that plastic is devastating for the planet and its links to climate breakdown as well are – well, they’re completely linked. We’re not going to let them just roll back over us.’

When it became clear that some coffee shops were feeling resistant to allowing reusable cups, the team at City to Sea came up with #ContactlessCoffee – a simple way to serve drinks in reusable cups without staff ever touching the cups. Simply put your lidless cup on a tray, the staff take the tray to the barista who will fill it with the espresso and hot (non-dairy!) milk from the kit they’re already using, and then return the tray to you to put your lid back on. Voila!

‘We also set up an industry-wide task force called Repeat, at the higher industry level. We have Starbucks, Costa, Keep Britain Tidy and businesses in the community having monthly meetings talking about how we can make sure we don’t revert back to the same levels of single-use that we saw before COVID.’

Breaking the Single Use Cycle

‘Refill’ is a way to get people off single-use plastic bottles and ensure that everyone has access to tap water when they’re out and about. Starting as a city-wide initiative five years ago, businesses would put up stickers in their window and appear in the Refill app as somewhere people could come refill their water bottles. It’s now a global campaign and the free app has over 30,000 Refill locations.

They’re working on expanding the Refill app to include refill stations for coffee, lunch boxes and linking up to zero waste shops nearby.

Natalie’s book How to Save the World for Free is peppered with tips to reduce plastic in every area of your life, from the bathroom to the kitchen to your wider travels. And she focuses on options to fit a budget.

‘It’s a constant juggle between time, money and convenience. A lot of us are busy people and can’t necessarily afford making switches. Some of the switches involve an initial investment…so we look at what other options are out there.’

As Natalie looks ahead at the rest of the year, her advice is to take things one day at a time. And she asks herself, ‘have I been of service to the world today?’ In order to keep her own tank topped up so she has something to give, she finds hope and resilience by spending time in nature and meditating to find that inner stillness.