Want to Save the Planet? Then Forget About Beef. You Have to Stop Eating Fish ASAP.

‘Seaspiracy’ dives deep into the tangled web of the fishing industry.

By the end of the new Netflix documentary “Seaspiracy,” from the producers behind “Cowspiracy” and “What the Health,” one thing is abundantly clear: Earth is a water world.

It’s easy to forget the planet is mostly water, particularly as most of us have been holed up in our little plots of land for the last year waiting out a pandemic. But as “Seaspiracy” director and star Ali Tabrizi unravels, another pandemic may be much deadlier: we’re fishing our entire planet into extinction.

The film starts off much like its predecessors, with a quest for answers. This leads Tabrizi first to Ric O’Barry, the star of 2009’s Academy Award-winning film, “The Cove.” That film, directed by “Game Changers” director Louis Psihoyos, exposed the Taiji annual dolphin hunt in Japan. More than a decade later, O’Barry is ever the activist, unapologetic and brazen. But he’s not an optimist about our ocean crisis. He warns Tabrizi that if the slaughter at Taiji, which is about the “size of a football field” can’t be stopped, how can the rest of our massive ocean problems be curtailed? It gives Tabrizi pause but revisiting “The Cove’s” plot is only a pit-stop, however.

The filmmaker soon uncovers the connection between the tuna industry and the infamous dolphin hunt. He reels in a big one around the ubiquitous “dolphin safe” labels, getting Mark J. Palmer, Associate Director of the International Marine Mammal Project of Earth Island Institute and a spokesperson for Dolphin Safe, to say its own label cannot guarantee anything labeled as “dolphin-safe” is actually free from dolphin bycatch.

The film boils down its issues, from plastic pollution to overfishing, to two common denominators: money and deception.

Firstly, the money. The dolphin-safe labels found on myriad tuna brands around the world trace back to corporate sponsors like Japan’s Mitsubishi, which has a vested interest in the tuna industry. There are a number of government subsidies for fishing industries, particularly because we’ve overfished so much that yields are declining at rapid rates, making it more time-consuming and costly to meet targets. With fish still a vital food source for much of the world, the fishing industries are propped up with artificially low prices sponsored by taxpayer dollars.

There’s the prestige of certain ocean foods like the increasingly endangered Bluefin tuna, as well as shark fin, both of which fetch absurd market prices — Tabrizi mentions one tuna that sold for more than $3 million in a Japanese auction. Shark fin, banned in many parts of the world, is still a highly prized and high-priced delicacy. On Hong Kong’s market streets, Tabrizi’s cameras get shut down so often he fashions undercover cameras to get glimpses of the piles of fins. The numbers are incomprehensible: as many as 30,000 sharks are killed an hour, much of those for their fins.

In Taiji, where the dolphin hunts happen every year, many of the animals are slaughtered so they don’t disrupt the $42 billion tuna industry; dolphins and whales are essentially competition for the fishing boats, so they’re slaughtered to make catching the fish easier. The Taiji hunt also props up the captive dolphin industry with some live dolphins selling for upwards of $100,000.

The second big “seaspiracy” exposed comes by way of the isolated nature of fishing and the deception that seems to all-too-easily breed. These are murky waters, especially on the boats. It hearkens back to Captain Hook-era piracy plank-walking days where “observers” sent onto boats to verify dolphin-safe catches, for example, disappear — there are dozens of cases of this noted. There is documented bribery, theft, doctored ledgers and sketchy self-reporting by ship captains. There are horrific accounts of human slavery, particularly on the more than 50,000 Thai shrimping boats.

But the lack of transparency doesn’t just happen out at sea. Tabrizi fails to get any response from the tight-lipped Marine Stewardship Council despite making numerous attempts. He traces that group to sizable contributions from food giant Unilever. The MSC makes 80 percent of its money from licensing its logo — a conflict, Tabrizi points out, to conducting due diligence. Tabrizi’s cameras are forced off during an interview with the CEO of the Plastic Pollution Coalition when he asks why the group doesn’t recommend eating less fish as a way to protect the oceans. The group encourages eating “sustainable” fish instead and making shifts to reusable straws to help keep plastic out of the oceans.

And here is where Tabrizi makes the film’s most salient point: telling people to stop using plastic straws to save the oceans is like telling people to stop using toothpicks to save the Amazon rainforest. Tabrizi drops an anchor into the ocean’s biggest plastic problem — and it’s not straws or even microplastics, as a Plastic Pollution Coalition representative suggests. It’s ghost fishing gear, making up nearly half of all plastic in the oceans. This, of course, is a byproduct of the world’s massive fishing industries.

The numbers are hard to comprehend: more than 2.7 trillion fish are pulled from the oceans every year, making it the largest wildlife poaching operation on the planet by far. By comparison, animals raised on land for food total 55 billion. That’s a big number compared to the humans on the planet at seven billion, but it’s still a drop in the literal ocean compared to the fishing numbers — one trillion is a thousand billion. Still, despite the sheer magnitude of our water world, the oceans have been so overfished for so long that experts now fear the majority of fish could be wiped out in just the next two decades. Adding insult to injury, the oceans could have more plastic than fish by 2048, experts warn.

And that’s a recipe for disaster on a number of levels. From devastating communities that depend on fish for sustenance to the environmental impact. Experts agree a loss of ocean biodiversity also spells doom for those of us on land.

British activist and Guardian contributor George Monbiot speaks to the climate crisis and how vital the oceans are in thwarting it. But he says even with the devastation at all-time highs now, “there is real hope” because marine ecosystems “bounce back so quickly,” he says. “This is within our grasp. We can do this.” He says the only ethical thing to do to save our oceans is to “stop eating fish.”

Marine conservation organization Sea Shepherd founder Paul Watson minces no words in simplifying the climate change issue — the oceans are the world’s largest carbon sink, but species loss and pollution are threatening their abilities to sequester carbon. “If you want to address climate change the first thing you do is protect the ocean,” Watson tells Tabrizi. “And the solution to that is very simple: leave it alone.”

The poetic and brilliant American marine biologist Sylvia Earle, now 85, makes a moving case for fish sentience, describing in detail how these animals are designed to feel. She details the way fish can detect the “most exquisite little movements” through their lateral line systems. “To me, it’s even remarkable that the question is even asked, ‘do fish feel pain.’ As a scientist, it’s common sense,” she says.

Earle says far too many people and businesses prop up the argument that fish aren’t sensitive or aware. “It’s a justification for doing dastardly things to innocent creatures,”  she says. “It’s the only explanation I can think of for treating fish with a barbaric attitude.”

The film is swirling in mind-bending statistics: there are so many longlines used in fishing they could wrap around the world 500 times; turtles die because of fishing bycatch at a ratio of 250,000 to just 1,000 killed by plastic straw; bottom trawling has deforested the equivalent in land size to most of Europe and Australia combined.

“Seaspiracy” also floats new buzzwords sure to live on like the nickname for giant fishing boats dubbed “death machines.” And there’s “bluewashing” the ocean version of “greenwashing”, it describes the glossing over of exploitation and depletion of the oceans with labels like sustainable fishing, dolphin-safe, and Marine Stewardship Council approved. Monbiot introduces “blood shrimp,” the byproduct of human trafficking and slavery in Southeast Asia’s fishing industry.

Tabrizi doesn’t lose his footing in all of this, though. Like a seasoned surfer, he rides it through to the end, steadier the longer the wave.

The last stop of the film takes him and his partner to the Faroe Islands, where they witness a whale hunt. It’s a bloodbath. There’s no narration. The viewer is left to simply bear witness.

A bit later Tabrizi speaks with a whaler who justifies the killing as reducing the number of lives taken to feed the maximum number of people. One whale equals 2,000 chickens, he says. But even he seems unconvinced by his own argument. That’s a flavor throughout the film — justification happens because it needs to, even though it appears as if no one actually believes it. John Oliver made this same argument last Sunday when he dived into the plastics industry and its deflection of culpability. “Lies go down easier when you want them to be true,” he said. Here, Tabrizi appears to have exposed a whole fishbowl full of them.

He lets his childhood idol bring it all into perspective though, ending things on a much more optimistic note.

“It isn’t too late to take the best hope we will ever have of having a home in this universe,” says Earle, “to respect what we’ve got, to protect what remains.”

“Seaspiracy” is streaming now on Netflix. 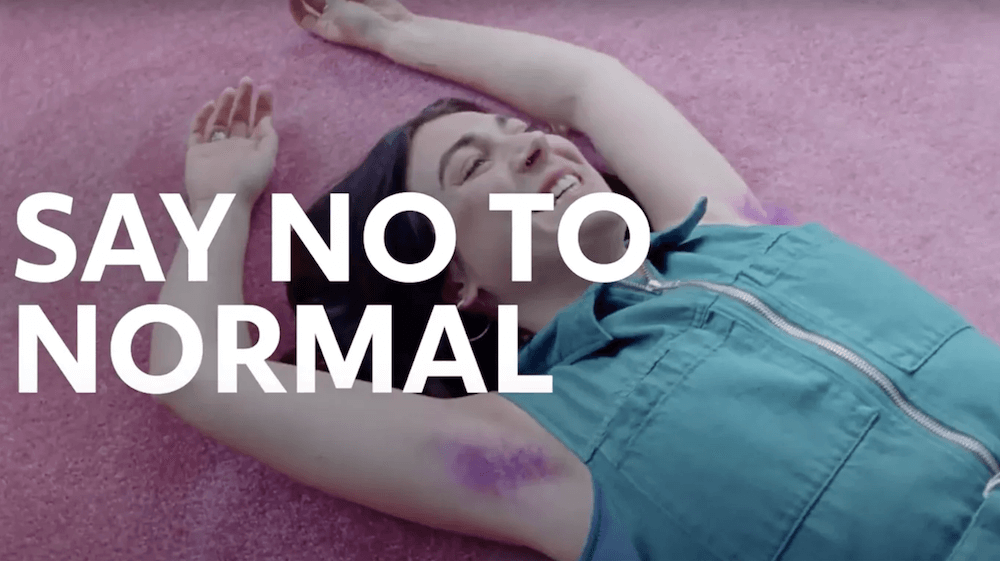 Multinational retail brand Unilever is moving away from ‘normal’ on its beauty and skincare labels to foster inclusivity. 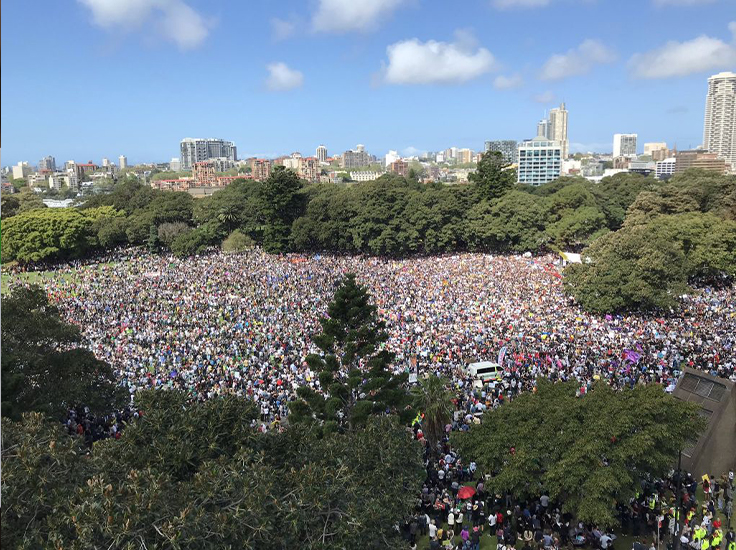 Striking for the Future

Millions of people around the globe are walking out of schools, universities and workplaces today to raise awareness of climate change and demand urgent action.

The Flight of the Starlings

Throughout history, people have turned to the beauty and wonder of nature in the face of uncertainty and chaos.