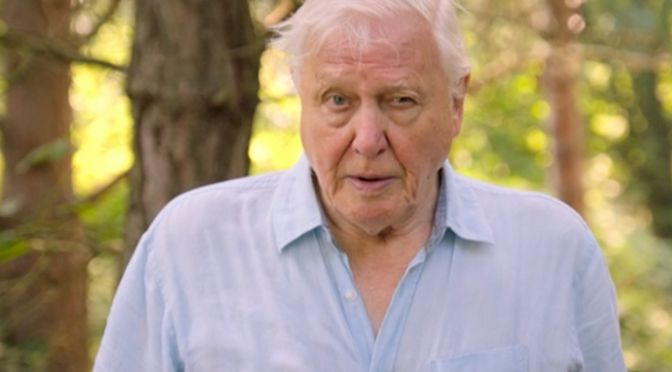 In his latest production – Sir David Attenborough urgently calls us to act before it’s too late.

‘Our planet is home to a seemingly infinite variety of species, from ocean giants to the tiniest insects. We call this abundance of life, biodiversity.’

When Sir David Attenborough appears on our screen, we’re normally confident about what will follow.

We expect to see stunning footage of nature and wildlife from around the world. We expect a sense of wonder at the beauty, strangeness and power of the natural world. And since Blue Planet II, we are likely to get a hint of how humanity is impacting our planet.

But we’re seeing a very different production from the world’s favourite naturalist with his most recent one-hour film, Extinction: The Facts, now available on BBC iPlayer.

This biodiversity, he tells us, is ‘vanishing at rates never seen before in human history’.

In 2019, the United Nations brought together more than 500 scientists to perform a global assessment on the state of the natural world. What they’ve found is that ‘extinction is now happening 100 times faster than the natural evolutionary rate. And it’s accelerating.’

‘When you look at previous groups and fossil records, it’s over millions of years that they go extinct,’ says Professor Kathy Willis, a plant scientist from the University of Oxford. ‘Here we’re looking at tens of years.’

‘We’re facing a crisis, and one that has consequences for us all,’ says Attenborough. ‘It’s never been more important for us to understand the effects of biodiversity loss – of how it is that we ourselves are responsible for it. Only if we do that, will we have any hope of averting disaster.’

The extinction of plants, insects, fish and animals are creating crises now, today. It’s no longer a matter for future generations to solve.

From shortages in our food supply, lack of access to freshwater to more extreme weather events and global health crises like COVID-19, scientists can trace these effects back to humanity’s imbalance with the natural world.

‘Over the course of my life I’ve encountered some of the world’s most remarkable species of animals,’ says Sir David. ‘Only now do I realise just how lucky I’ve been – many of these wonders seem set to disappear forever.’

So, what are some of these solutions?

The programme is a wake-up call from a man who loves this planet deeply. He is asking us all to come together to stop creating these crises and act on solutions.

As awful as the COVID-19 crisis has been, it has given us a chance to hit the reset button. We can reflect on what and how we want to rebuild our societies, our economies, our cities and our relationship with the natural world.

‘The world is in a recession,’ says Professor Lord Nicholas Stern, Economist, London School of Economics. ‘Governments are recognising that they have to invest to drive out of it. I’ve been involved in a study with the finance ministries and the central bank governors of the world, in thinking through what the best ways out of this crisis are. And we’ve found that those investments which are good for the environment are very powerful ways out of the depression we find ourselves in.’

We can cut down on unnecessary consumer goods

‘The average person in the UK consumes nearly four times the resources of the average person in India,’ says Attenborough. ‘And in the United States, it’s about seven times as much.’ By choosing to consume less, we can move away from the destructive processes that go hand-in-hand with producing consumer goods.

‘We’ve already lost nearly 90% of the wetlands around the world,’ says Sir Robert Watson, Chair, Intergovernmental Platform on Biodiversity and Ecosystem Services. ‘We’ve transformed the forests, our grasslands, we’ve converted 75% of the land that is not covered by ice.’ It’s time to rebuild and regenerate the ecosystems that sustain us.

We are conditioned. And we now expect cheap food and a wide variety of choice year-round. But a lot of that food is produced in unsustainable ways. The worst offenders are soy (mostly used as animal feed), cocoa, palm oil, coffee, and beef. And when you consider that we waste 25-40% of all food, you begin to see that we have the capacity to meet demand without further expansion.

We can vote for leaders who will prioritise our natural environment

We need laws that protect the natural world and governments who have will to put the long-term health of the planet above short-term profit from extraction. Around the world, at every level, we need to elect representatives who will stand up for our future.

‘One thing we do know,’ says Sir David, ‘is that if nature is given the chance, it can bounce back.’

The programme ends with Attenborough’s recollection of an encounter he had with a band of gorillas 40 years ago in the Democratic Republic of Congo and Rwanda. There were only 250 gorillas left at that time. But conservation efforts have allowed the numbers to rebound as the community learned to value this species and live alongside them. There are now more than 1,000 gorillas in the area — including the daughter and granddaughter of one of the gorillas Attenborough met on his first visit in the 1970s.

‘I do truly believe that together we can create a better future,’ says Sir David. ‘I might not be here to see it, but if we make the right decisions at this critical moment, we can safeguard our planet’s ecosystems, its extraordinary biodiversity and all its inhabitants.

‘What happens next is up to every one of us.’