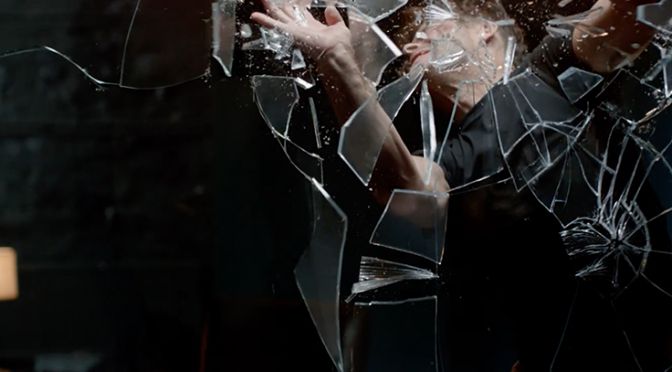 The first big question was this: How the f*** do I persuade an actor to jump through a massive sheet of glass? Pretty easy, actually, as it turns out.

Well, for starters, it was never going to be real glass, but…

Sugar glass is made by dissolving sugar in water and, according to my brief online research for this article, heating it to approx 150 °C / 300 °F. This is what we use when filming to create the illusion of someone going through glass. Being less resistant to physical impact than real glass, it is far less likely for someone to hurt themselves, but despite this we always work carefully as it still carries risks.

‘Great,’ said Alex Reece, the actor I spoke to by phone, after some research into who might fill the role. ‘Sounds fun to me.’

Alex has an interesting and varied background. He has studied many martial arts – including the highly energetic Brazilian capoeira, where its players literally chuck themselves through the air in what seems like the physical equivalent of 3D chess.

‘I’ve always had a pretty crazy, wild life and that’s reflected in the roles I get. I went to military boarding schools, studied judo and karate from age eight, was a rifle marksman by the time I was 10, did a year at university and left to join the French Foreign Legion.’

Hm, seems like I had found my man for the job.

The 90-second film script, created by my long-time mucker and creative collaborator in advertising Julian Borra of Thin Air Factory – whom I’d describe as a man able to pack more adjectives into a sentence than an overfilled sandwich – tells the story of someone pushed – or perhaps better put, pushing themselves to the limit.

The glass was obviously a metaphor and his script was called ‘Smashed’.

Our brief was to bring to the attention of people in the film industry a ground-breaking research questionnaire to be run by the 100-year-old Film and TV Charity to find out the negative impact the areas of film they worked in had on their lives, be they writers, camera crew, makeup or directors like myself.

I, incidentally, personally had never heard of the charity, despite my own forty years in the industry, and despite its existence to help people like me for near on a hundred years. Yes, that’s 100 years!

An industry which I personally have experienced at times being the career equivalent of a fairground helter-skelter ride, with many ups and downs.

For as much as the highs are like nothing else when things are going great, the lows can be shattering.

Long periods of unemployment, long hours where we work like crazy, perhaps believing it to be our last gig ever.

A wonderful industry, for sure – a privilege to work in it – but, hell, sometimes it can catch up with us in ways we do not always realise until too late.

This can have an impact on our mental health, our relationships both at work and home and also financially.

It’s very easy to see how people turn to alcohol or drugs.

Not anything I have ever done myself, but statistics do tell us that the rate of suicide has gone up massively in the last few years.

In the latest Samaritans report, they found that death by suicide has increased 10.9% in the UK in 2018 with men three times as likely to die by suicide than women.

‘I want you to run at the glass and literally whack into it,’ I said, as Alex and my crew, including someone assigned to watch over Alex’s safety as our well-experienced stunt coordinator, listened on at a small studio near to Islington, London.

I ran at the glass to demonstrate, stopping short of actual impact.

Alex nodded and under the watchful eye of our aforementioned threw himself at a shop-front sized area of glass, held firmly to the studio floor by a complicated mishmash of wooden supports to take the impact.

The sound of his body hitting the thing still sends a chill to me to this day, as he bounced off then fell to a stunt crash mat.

To tell the story, we had worked out we needed two stages: the bit where Alex would be seen to smash against the glass without going through; the second bit where he would actually go through – and filming it with special cameras used to slow down the beating wings of hummingbirds in nature films, we’d achieve the dramatic and visceral effect of his body going through the glass.

People had suggested to me I might achieve this by doing it with post production and CGI, but Julian and I agreed this would never get the physical effect we wanted to put over the idea.

Anyway, to cut to the chase, you can see the finished film below.

Regarding its impact and how it spoke to our co-workers in film, we got 9K responses – which really is fantastic. These insights, along with further research from The Works Foundation, have now informed a new study on the mental health and wellbeing of the industry’s workforce.

It is through this research, the Film and TV Charity will be able to continue their amazing and truly worthwhile work to its greatest impact, and to help as many people as possible.

The study was published and revealed to the media on Tuesday 11 February – along with details on the new Industry Taskforce and their short-term and long-term response.

Which is all a rather long-winded way of saying there were just under 9K Looking Glass submissions to the online questionnaire, which was a massive response from our client’s point-of-view, as they hoped for 3-5K submissions at most.

The Smashed film has been watched over 640K times to date and rising as the film continues to do its work.

It has been good to feel like one has been part of something truly worthwhile, and which could have a massive positive effect on our industry.

Without banging our drum too loudly, I guess you could say we smashed it.

Tim Pope is a world-renowned film director, who as well as having directed a gazillion pop videos for artists from David Bowie to Neil Young has made a feature film in Hollywood, short films, commercials, documentaries and last year a live film “Anniversary” of his mates The Cure that opened in 1, 500 cinemas. He also lectures in film at universities. See more of his work at http://www.timpope.tv/