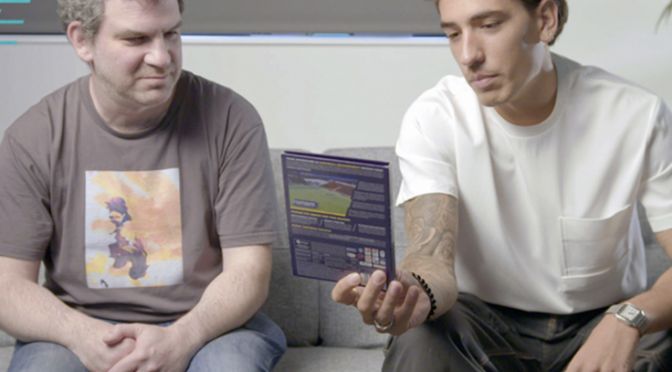 An Advocate for Change

There’s no denying the fact that the entertainment industry has been a huge contributor to plastic pollution. This is most evident in the packaging used for films, music and video games.

The cases the discs come in aren’t always recyclable and everything is shrink wrapped in non-recyclable plastic. And all those DVDs, CDs and games that don’t sell? They end up in landfill, or worse still, in the oceans.

The results? A lot of people felt that they, as individuals, were trying to make changes in their own lives. But companies weren’t doing enough to address the issues facing the planet.

So he decided Sports Interactive would do something about it. In an industry-first, Football Manager 2020 will now come in an eco-friendly and recyclable package, saving 20 tonnes of plastic waste this year.

To announce the move, Miles sat down with Arsenal FC player and environmental advocate, Hector Bellerin.

A love of the outdoors

Hector grew up with a strong connection to the outdoors. He rarely stayed inside as a kid. He recalls exploring the countryside and forests with his cousins and sister at the weekend. Or he would play beach football with friends and go for a swim in the sea.

There were times though when his parents would keep him out of the water. Those were the days when the sea was full of plastic and rubbish was washing up on the shore.

Over the years he’s seen the problem get worse and he believes we all have a role to play in changing the status quo.

‘People may feel like one person, one individual, isn’t enough to change. But if everyone thinks that, there is no way we can do it.

I feel like, with the platform football has given me, I’ve been able to speak about the subjects that I care about more. It’s given me a voice. I’ve always believed it’s a duty for people like me that have a voice to use it in a positive way.

Working with colleagues at Sega and with suppliers Bridge Media Group and Sonopress, Sports Interactive has designed a fully recyclable package:
> The shrink-wrap is low density polyethylene
> The cardboard packaging is 100% recycled fibres
> The manual inside is printed on recycled paper
> All the copy on the package and manual is printed with vegetable or water-based ink

The only part that isn’t easily recyclable is the disc itself. But the company is providing addresses that people can send the discs back to so they can be repurposed too.

Miles acknowledges that this does come with a cost. It is 30% more expensive to package in this way, but they made a decision that there are some things that are more important than the money.

The carbon emissions, the plastic – they’re choices to save money or to make money. But if there’s no earth, there’s no money to spend. At the end of the day, it’s important for everyone to cut off a little bit of margin and be able to help people, to be an example.

I think it’s a great initiative and hopefully everyone will start doing the same.’
– Hector Bellerin