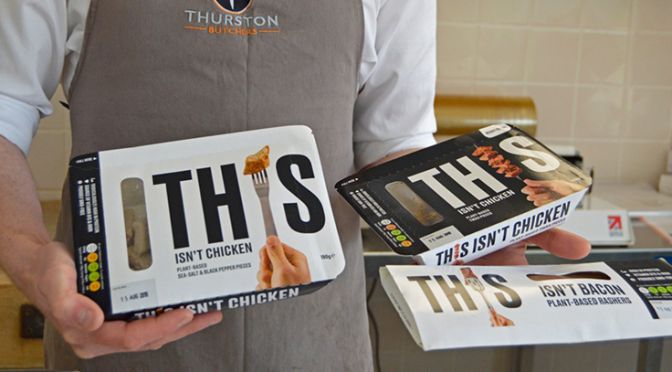 There’s no doubt we’ve been experiencing some odd summer weather. July was confirmed as the hottest month on record. And August has started with unseasonably cool days and heavy rainfall leading to flooding in parts of the country.

But regardless of the weather, one thing stands as a cornerstone of the British summer – the BBQ.

We’ve written previously about easy vegan BBQ ideas to try out this summer. But now, there’s even more choice for those of us eating less or no meat.

Thurston Butchers, owned by Alastair Angus since 2016, is the first butchers in the UK to offer a vegan and vegetarian alternatives. They’re partnering with THIS, a plant-based London startup that has created meat alternatives for bacon and chicken.

We caught up with Alastair to find out more.

‘I was interested in food even before I got interested in running businesses. One of the things that always attracted me was that relationship between the farmer and the end product. I was aware that – living at university – going to the grocery store, you lose that contact. Because I was from a rural background, I understood that and missed that when I moved to a city.’

It’s this idea of farm-to-plate and recognising provenance that has really caught on with a mainstream audience. People are more aware of what they’re eating and how it impacts them and the world around them.

Alastair references the 24/7, 365 mindset that we as consumers have been asked to buy into. When you can get greenhouse fruit and vegetables year-round delivered to your door, you lose the sense and rhythm of the seasons that our grandparents and earlier generations knew so well.

‘Now, we’re almost taking a backward step – we’re going the other way and looking at more artisan produce. Farmers markets are cropping up all over the place and people are doing so much more with street food. There’s more respect about food and how we look at it.’

Leaving university with a philosophy degree, Alastair opened a farm shop and butcher shop before striking out on his own in 2016. From the start his approach was quality over quantity.

‘Back in the day, we used to treat meat as a luxury item. Save up all week for a Sunday roast, that would last us for Monday and Tuesday reheated. That was it. We’ve gotten to the point where it’s such a cheap item, we just throw it into stir-fry five or six times a week and don’t even think about it.’

Over the past six months, however, Alastair could see a new trend emerging. Vegans and vegetarians who came to the shop for other people were asking for meat alternatives. And then the regular customers started to talk about their changing eating habits too.

Alastair believes it’s in response to the media coverage on climate change and recent documentaries, like Cowspiracy, that are starting to change the way people think about what they eat and where it comes from.

‘In the last month, two months, I did more research about it and asked how can we be the difference in offering an alternative to those people who want it..’

After looking at multiple brands – even considering creating his own product – Alastair chose THIS, a London-based start-up that has spent the past 18 months creating plant-based alternatives to bacon and chicken.

It was the social media from THIS that first caught Alastair’s attention.

‘The reason it stuck with me is that they weren’t just going after the vegan market. It was calling out for the same reasons we were looking to stock something – which was to keep our meat-eaters happy as well and offering an alternative for them too, not just a vegan alternative.’

Alastair knows that emotions around veganism and eating meat can quickly escalate. He appreciated how THIS approaches the topic in a chilled out and conversational manner. And the response from the public to his decision to serve both groups has been primarily positive.

‘I’m open to debate. I’m open to talking about these things. That’s one of the reasons we’ve done this – is to shed some light on the subject. I thought we’d get more backlash from it than we did, but people are seeing it as an open-minded move.’

Regardless of where you are in your dietary choices, whether you’re experimenting with #MeatFreeMondays or you’re a dedicated vegan, having options is key.

Next time you find yourself near Bury St Edmunds, call in at Thurston Butchers and show your support. Alternatively, you can find THIS products in Holland & Barretts across the country and from additional stockists in London.

We’d love to hear about how you’re reducing carbon emissions with your diet. Let us know in the comments below or over on our social channels.