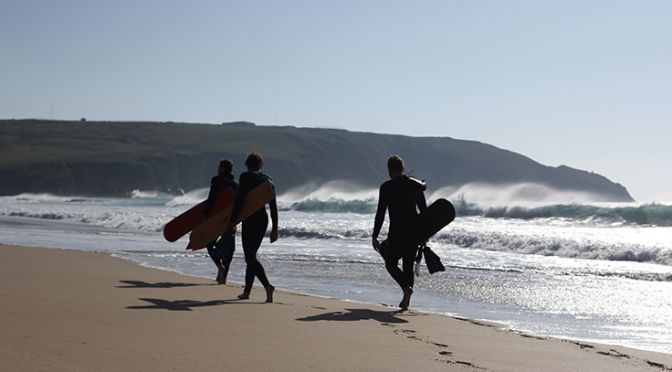 Not hopping on a flight this summer?

Thanks to COVID-19, large numbers of people are likely to be holidaying at home and in the UK that often means the beach – but, while this is a good result for CO2 emissions, not all ‘staycations’ are created eco-equal.

Step forward, the bodyboard. I know, I know – sorry to name and shame but these cheap polystyrene wedges of surf-riding fun are nothing short of a disaster for the very oceans they encourage us to frolic in. Although you’re on your tummy, you still end up leaving a substantial footprint.

According to Neil Hembrow, of anti-litter charity Keep Britain Tidy, many of the bodyboards that we can pick up for peanuts at beachside shops are manufactured in Asia and, therefore, rack up the miles even before reaching our shores. Add to that poor quality and what you have is a board likely to snap after just a few rides – not only shedding thousands of polystyrene ‘balls’ into marine environments, but also then disposed of on or near coastal areas – destined for landfill.

Over the course of the 2019 summer holiday season, just two beaches – Cornwall’s Watergate Bay and Devon’s Croyde – yielded a whopping 480 broken bodyboards, abandoned on beaches and in dunes. Thanks to Neil’s innovative work, the boards were repurposed, creating insulation for, among other things, beehives at a local honey farm. Even so, each year sees around 16,000 such boards make their broken and ruinous way into the UK environment.

Sure, one solution might be to invest in a surfboard and get to grips with wave riding like a pro – but let’s face it, with limited vacation time, who could be blamed for wanting to take to the water in ways that are easily mastered? This, of course, is just one of the reasons why bodyboarding has long been so popular – but there is another way.

The Newquay-based artisans at Dick Pearce craft each of their bellyboards by hand, using wood that has been sustainably sourced in Europe. As well as the fact that the boards are sturdy enough to be enjoyed forever – indeed, owner Jamie Johnstone still has boards that belonged to his grandparents – even the design of the boards is steeped in longevity: the blueprint has been adhered to since the 1940s, when the company, located at the time in a barn in Devon, first started out.

‘We still use the original template and, largely, the original instruments,’ says Jamie. The shape is similar to a snowboard or skateboard – about 4 foot in length and, adds Jamie, with a slight curve in the nose, which stops you from nosediving. Any other changes have been aesthetic: the colour palette has been contemporised and previously rough-hewn wood is now gently sanded.

While the appeal of a ‘bargain’ is always alluring, fast fashion has gone a long way towards showing us, especially in recent times, that the hidden costs of cheap buys just aren’t worth it. The same can be applied to leisure purchases: as Vivienne Westwood said: ‘Buy less, choose well, make it last.’

And a Dick Pearce bellyboard, priced from £50, will more than pay for itself after a couple of sessions – not only because you won’t need to replace it multiple times over the course of one holiday, but also because bellyboarding is so easy that you won’t have to shell out for lessons to nail it.

So how do you do it?

It’s as simple as walking out in the water until it reaches your waist, or thereabouts, and then turning to face the beach. Hold the board, nose up, against your stomach and look over your shoulder for approaching waves. When one comes, simply kick off and ride it in, holding the board close to your body.

Sounds just like bodyboarding, doesn’t it? And in many ways, you’d be forgiven for thinking that the only difference is in the use of materials: a simple case of synthetic vs natural, imported vs local, disposable vs durable. There’s more to it than that, however, as Jamie explains:

‘On a bodyboard, you’re basically on a big slab of foam, riding the wave but not immersed in it,’ he says. ‘A bellyboard brings you closer to the water: you’re more connected to the experience.’

A more holistic encounter entirely then – something that, in an era where frazzled lifestyles, existential crises and exhausted burnout have made activities like yoga, shinrin yoku and wild swimming more popular than ever, is very much in keeping with the zeitgeist.

And for anyone still toying with the idea of trying to master surfing? Your ability may not hold you back – but British conditions, quite possibly, will.

‘British waves are often small and sloppy,’ admits Jamie. ‘Bellyboards allow you to get the most out of what would ordinarily be really poor conditions. On nights when the waves aren’t decent enough to warrant taking our surfboards down to the beach, they are more than adequate for the bellyboards: it’s always huge fun.’