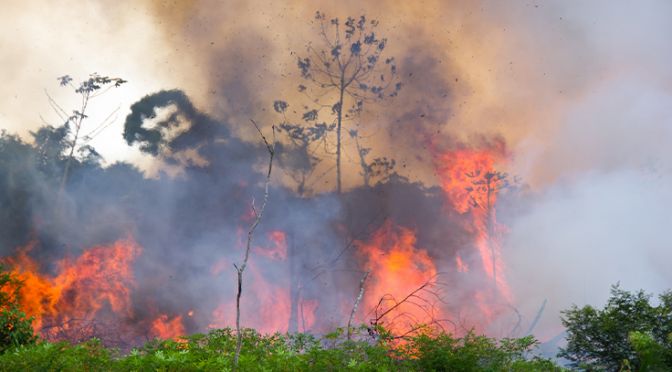 The Amazon Is Burning

Wildfires in the Amazon basin have increased 84% from the same period last year, according to the National Institute for Space Research.

Why should we be concerned?

The Amazon basin acts as a carbon store. The trunks, branches and leaves of the trees take in excess carbon dioxide and give off oxygen. More than 20% of the world’s oxygen is produced in the Amazon rainforest. As it burns, it releases carbon and it’s capacity to store it after the fires stop is diminished.

The Amazon contains 10-15% of the world’s terrestrial species and is home to more than 1 million indigenous people. Their homes and livelihoods are threatened as each day passes.

One-fifth of the world’s freshwater is found in the Amazon basin. Its unique ecosystem means that it recycles most of its own water. If the water cycle is disrupted, there will be long-term consequences for the people who live on and work the land.

Why is this happening?

Conservations point out that deforestation has accelerated since President Jair Bolsonaro took office earlier this year. Instead of living up to campaign promises to curb corruption and illegal activity, his policies have reversed years of work in conservation efforts.

As scientists point out the warning signs of deforestation and climate change, Bolsonaro claims the data has been falsified and that NGOs started the fires to damage his reputation. And now the director of the National Institute for Space Research has been fired.

The Economist reports that 70-80% of logging in the Amazon is illegal and Bolsonaro shows no signs of cracking down.

And coverage by the BBC points out that wildfires are also used to clear land that farmers can transform into crop fields and pasture land for raising cattle.

‘South America’s natural wonder may be perilously close to the tipping point beyond which its gradual transformation into something closer to steppe cannot be stopped or reversed, even if people lay down their axes.

Brazil’s president, Jair Bolsonaro, is hastening the process – in the name, he claims, of development. The ecological collapse his policies may precipitate would be felt most acutely within his country’s borders, which encircle 80% of the basin – but would go far beyond them, too.  It must be averted.’
The Economist

What can we do about it?

Whilst we can’t all don personal protective equipment and tackle the blazes on the front-line, here are three ways we can help.

1. Give money to a charity that protects the rainforests
The big names in this space are Rainforest Trust, Amazon Watch, Amazon Aid Foundation and Rainforest Action Network, with its Protect-an-Acre campaign.

2. Send a message with your wallet
Cut back on wood, paper and beef produced in the Amazon basin. If you do want to support local people, purchase from companies with the Rainforest Alliance certification.

3. Plant trees while you search the internet
Search engine Ecosia.org plants a tree for every 45 searches you make, benefiting the environment and giving back to local communities. And their servers run on 100% renewable energy and every search removes 1kg of CO2 from the atmosphere.

Show your support on social media with #PrayforAmazonia and #AmazonRainforest