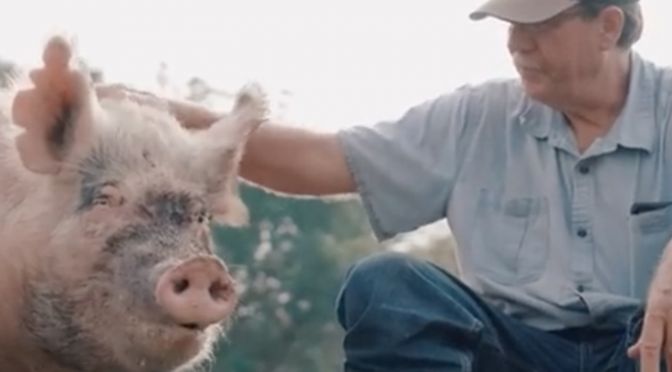 Our founder, Rachel, combined her love of animals, environmentalism and filmmaking when she journeyed to Texas for World Meat Free Week.

The challenge? To inform a global audience about the link between meat consumption and climate change.

And before she knew it, she was heading off to film at the Rowdy Girl Sanctuary where she was about to meet force to be reckoned with, Renee King-Sonnen, a rancher’s wife turned vegan.

I awake early on the morning of the shoot in Angleton, Texas, a murmur of excitement building in the pit of my stomach. The sun rises through the same hazy atmosphere that I imagine those ‘born on the bayou’ saw – the days of the Deep South, the Cotton States dominated by a cohort who allowed greed to become more important than life. Since then, oil may have replaced cotton but ranching is still very much inherent. A way of life, steeped in tradition and controlled by money and power – a noxious combination.

Reminiscent of the wanderlust feelings presented to me by nature and the hazy sunny days of the seventies, the crickets sing and the expanse of land presents a welcoming cloak of opportunity. Of course, this is shattered somewhat by the knowledge that the lands and their beautiful creatures furiously battle with mankind in bid to survive, the stakes for the opposition being simply about money and capitalism. However poignant the sunrise, it is tinged with sadness. The pursual of money increasingly overrides our respect for Mother Earth until, that is, somebody makes a stand.

The protagonists of this story, Renee and Tommy Sonnen, most certainly stood up. In the face of adversity and amongst their cattle ranching contemporaries, they decided that it was high time for a new revolution.

I stand outside the hotel with my crew, awaiting our taxi. It fails to show and in true welcoming, Texan style, Renee kindly comes to our rescue. She arrives, greeting us with the hugs and smiles of long-time friends.

After a short journey, we arrive at the Rowdy Girl Sanctuary. I’m in my element. All I can see are animals and there’s this feeling of absolute peace and happiness.

The ranch becomes my awakening. I feel at home here. We wander freely through Renee and Tommy’s home, through the fields, amongst the animals. We hear tales of their experiences – the transition from cattle ranch to animal sanctuary – the floods that wreaked havoc, the fight for survival. I immediately befriend, Domino, the most beautiful dog who, for some reason, I feel I’ve met before. She arrived at the ranch having been thrown out of a moving car and here she lives, settled and content, surrounded by love. All but one of the seven babies that she delivered, shortly after arriving, live here too. Renee’s stringent vetting meant that only one suitable home was found and so the rest of Domino’s pack remain.

I’m honoured when Renee invites me to her inner sanctum, her meditation room. I feel completely aligned with her in our ethical views and our spirituality. This is turning into the most magical day.

We trek off to the far end of the ranch to set up Renee’s interview. The huge, draping trees look like some mystical, magical beings and the fields throw out a carpet of buttercups beneath our feet. We begin the interview and three horses trot up to introduce themselves and make friends.

A while later, we venture in to meet the cows and to set up for Tommy’s interview. A beautiful big, brown cow – an unusual breed – Cinnamon, comes to say hello. I’m slightly alarmed at first but Tommy smiles and says there’s absolutely nothing to worry about! I could listen to Tommy speak all day – he’s eloquent, philosophical and very well informed. A truly beautiful man whose compassion ran roughshod over his multi-generational ranching background and its side order of tradition, familiarity and history.

Before I know it, this wonderful day has come to an end. The car arrives to take me back to the airport. I feel completely overcome with emotion. I say goodbye to Tommy and the crew who are still in one of the fields filming. And then, I say an unbearable goodble to Renee and Domino. My sobbing only ceases when we’re nearing the airport and my only comfort is that I know I’ll return.

Over the years, I’ve wavered between being vegetarian, eating little bits of chicken and fish, and more recently being vegan. Even during the last year, I have had the odd bit of dairy cheese or eggs when there were no vegan options available. But my Rowdy Awakening has been a cut off point. I know that I will never eat, wear or use any ‘product’ that is the result of suffering and the death of a living soul. Each day, I make an effort to eat healthy, fulfilling and delicious plant based food. I can’t believe the tastes and textures that I have encountered, and to think, I may never have experienced such delights. And each day, I feel great – I’m sleeping well, I’m energised and mentally, I am safe in the knowledge that I am ‘doing my bit’, and the latter isn’t just a mental health perk, I feel whole, I feel happy and I feel like I’m living the life that I should be. I have never felt such peace and it’s thanks to Renee, Tommy and all the animals at Rowdy Girl.