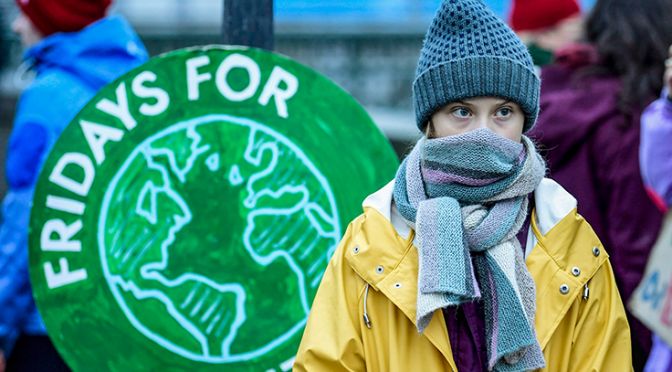 How to Tell Kids the Truth About Climate Change

To prepare climate strikers for the future, we need to rewrite the history books.

If radical action to reduce emissions isn’t taken in the next decade or so, many of today’s schoolchildren could live in a world that’s 3℃ or 4℃ hotter by the time they enter their later years. Their working lives would be defined by routine weather extremes, widespread crop failures and catastrophic sea-level rise.

With such grim prospects, the natural question facing young people is how did we get here? School climate strikers and the student-led Teach the Future campaign have called for wholesale reform of the education system to help answer this, and prepare the younger generation for facing a future of intensifying climate and ecological crisis.

But the UK currently has no formal training or support for teachers to carry out ‘climate education’. There is so little space in the curriculum that some schools teach it in PSHE, along with sex education, or ‘British values‘. Without clear guidance, schools might use materials designed to mislead students about the science.

The situation is now so bad that simply telling the truth about the climate crisis in the classroom also raises serious questions about the effect on a child’s mental health. Parents could be forgiven for not wanting their children to hear it.

But even a curriculum that offers a better grasp of the facts of climate change and opportunities to reconnect with the natural world might not be effective on its own. Climate action will require fundamental and rapid changes in all spheres of life. Children need to know why we are in this situation, and what must come next.

Teachers have a crucial role to play in this process. They will have to help young people critique and rethink the deeply ingrained assumptions, attitudes and expectations that run throughout history, and now endanger much of life on Earth.

Climate in the classroom

The history curriculum in the UK doesn’t list climate change among its examples of ‘challenges for Britain, Europe and the wider world 1901 to the present day’. Human history isn’t considered to have significant environmental contexts or consequences, despite the fact that modern life is a product of the energy bonanza provided by fossil fuels.

A major problem with public understanding of the current predicament is that most information and interpretation comes from the sciences. Scientists can explain what is happening and make projections for what might happen in the future. It isn’t part of their discipline to know why human societies have made the choices that have taken us to this point. Yet contemporary climate and environmental crises are the products of human activity.

History is usually taught and imagined as a sequence of events through which human societies advanced from primitive technologies and patterns of social organisation to their current, highly complex and sophisticated state. These events are usually described as ‘developments’, or even as ‘progress’.

When history is taught like this, students are left without any way of understanding why human societies and ecosystems are suddenly on the brink of collapse. There is no frame of reference for what, by any standards, is actually a vast, escalating failure of human choices.

Many large-scale human societies have failed to grasp the realities of life on a finite planet. Much of what these societies have done has been based on willful blindness to the effects of exploitation. This fundamental ignorance has persisted and in some ways grown over the centuries, even as technology has advanced.

A climate history curriculum should unpick concepts like ‘development’, and basic assumptions about what ‘progess’ looks like. When the climate crisis is taught as a byproduct of the modern world, it hides the deep history of human activities and value systems that continue to shape the present day.

How we got here

Over the centuries, powerful states tended to exhaust the resources of surrounding landscapes, producing sharp social hierarchies and celebrating the ‘victories’ of male warrior elites. Written accounts of these battles and wars, and their politics, are the traditional core of historical study.

Students could instead think about how societies over the centuries have obtained, organised and used resources, and what the consequences have been for human inequality and the environment. They should learn about modern European empires through their vast capture of human and environmental resources by conquest and colonisation.

They need to understand how this related to industrialisation, and how exploiting racialised slave labour, and increasingly, fossil fuels, generated the energy that fuelled modernisation and the affluent lifestyles of today.

Accompanying this should be a much clearer view of what was lost in these processes. European ideas about land management displaced localised and ecologically appropriate practices, with disastrous, ongoing consequences for indigenous populations and colonised ecosystems. The greatest biodiversity today is found in areas managed by indigenous peoples.

Students could learn from the ways of living, thinking, and gaining knowledge of different indigenous communities around the globe. Existing topics, such as the slave trade and the civil rights movement, would resonate differently to students who knew the continuing costs and consequences of empire.

History teaching could also look at climate change in the past and investigate how societies weathered environmental stress. Modern science could be recast as a tool that helps societies mitigate problems like climate change, rather than an engine of progress.

If today’s children are equipped with a deep and complex sense of how humans have inhabited environments, and the consequences for people and other species, they will understand the present situation far better, and make informed decisions about the future. They will be more resistant to arguments that prioritise economic growth over sustainability and social justice, and will have a clearer sense of how old power structures perpetuate modern problems.

All of this is crucial to educating – and preparing – the climate strike generation.