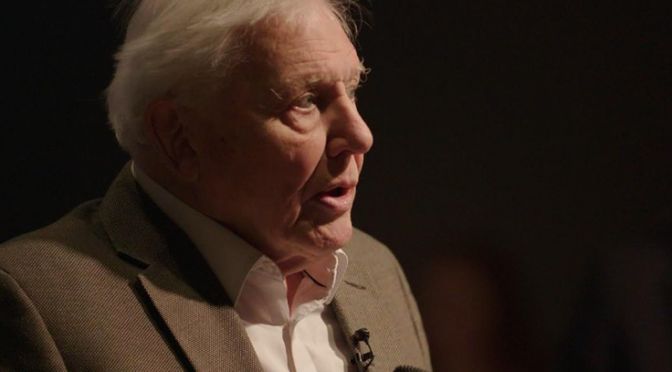 ‘The Clock Is Ticking’

What a way to kick off a podcast!

Lucy Siegle and Tom Mustill welcomed Sir David Attenborough for their first episode of So Hot Right Now. It was a great conversation full of insightful observations and advice from the world’s favourite natural history storyteller.

Be sure to subscribe to the podcast on iTunes or Spotify and keep reading for our favourite moments.

On the role of natural history films

‘The fact of the matter is that the world is more populated than it has ever been, the wilderness is scarcer than it has ever been and our contact with the natural world is extraordinarily limited. The United Nations says that 2/3 of the human population are urbanised. That means that 2/3 of the human population are to some degree out of touch with the natural world, because they only see it in limited terms or indeed not at all.’

Natural history films can provide that link for people who are distant from nature, educating them and showing them the wonder of the natural world. And knowing that people only protect what they love, this is more urgent than ever.

‘The standard of photography these days is just sky-high and demanding not only a remarkable insight into animal behaviour but a technological mastery of the various electronic devices we now have at our disposal.’

David acknowledged that it’s difficult to break into the industry right now with the level of competition. He said a lot of people started as filmmakers because they wanted to be out there capturing the animals that there were interested in.

For those just starting out, his advice is to create your own film as a proof of concept that you can show your craft.

‘Home video these days is close to perfection. So why not try and make a film about a simple thing, whether that’s a pigeon or a mouse or a rat or indeed a slug! If you set about selecting one of those things, you’ll think about the problems of how you construct a narrative or a story that will hold people’s attention – not just simple, exciting shots.’

And we loved this critique of film commentary:

‘The point of adjectives is to give people a mental image of what you’re writing about. If you have film, you don’t need adjectives…. The right way to make natural history films is to do your damnedest to tell the story in pictures. The best film of all would have no commentary at all. … The more you can leave to the pictures, the better. Commentaries, in my view, should be kept to a minimum. When I look back at films I’ve made in the past, I nearly always say to myself – there’s too many words there! If you pair the words down to the absolute minimum and allow the pictures to tell the story, it’s a very good discipline.’

On the public response to plastic in Blue Planet 2

He acknowledged that he was surprised and gratified by the public reaction, but wasn’t able to point to why this was the moment it clicked for people after he’d been talking about it for years and years.

‘If we as broadcasters knew what it was that suddenly makes something take off, we would be very clever indeed and have a talent that advertisers would give huge sums of money for!’

When Tom and Lucy asked him if we could learn anything from the public’s response to Blue Planet 2, he said simply, ‘No,’ which was met with laughter.

But his point was that we’re living in a complex environment with news headlines, internet memes, cultural happenings, other programmes and sporting events swirling around us. And broadcasters don’t know why something will elicit a response on one day when it has been ignored for weeks, months or years before… ‘Audiences are very difficult to predict.’

On working at the BBC

David shared how the BBC used to have a team of in-house experts in natural history that worked together on the programming and content: bouncing ideas off each other, finding the next story, exposing gaps in thinking, pushing things further. He said it was wonderful for those inside, but acknowledged that it was incredibly frustrating for those trying to break in.

Now that the broadcaster relies more on external pitches, the ideas they receive are much more similar in nature – which David attributes to not having that robust group-think dynamic. We’re all breathing the same air and ideas online so when people pitch stories now, they tend to follow existing trends.

It was a good reminder of how important it is for us to create our own communities that can help sharpen and challenge our ideas and help bring unique stories and voices to life.

‘The great source of hope is young people who see that their future is in jeopardy and believe that those of us who are talking about these changes and the influence of treating the natural world properly are talking the truth. And those young people are getting more political power as time passes and that is where the hope lies. The old retrograde people, stuck in their ways, with the old economic patterns are becoming the minority. In the future, as young people get older, wiser and more powerful will be able to do something about it. We must do everything we can to support them.’

‘The trouble is that right now, the climate issue is seen to be in the distant future because we have the virus to think of. What are the papers full of? The virus, and quite right – that’s what I want to know about too – but we have to make sure that this issue that was coming to the boil with the next COP meeting in Glasgow and has been swept off the front pages – we need to get it back there.’

‘What the result of the coronavirus is going to be, I don’t know, but I’m beginning to get a feeling that for the first time the nations of the world are actually beginning to see that survival depends on cooperation. And if that happens, it will be a first in human history.’