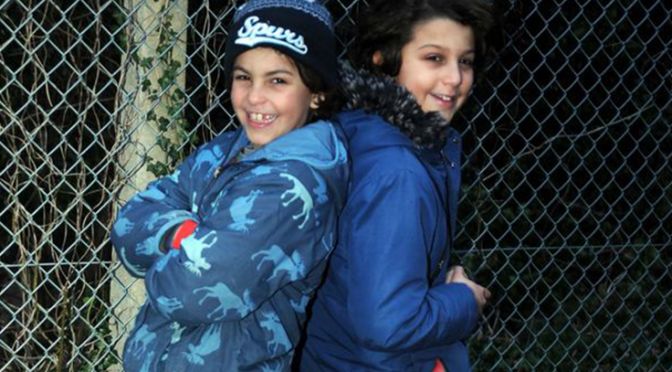 Pairing their love of football with litter picking, Danny and Jojo are making a big difference in their community

It all started with a tree, Jojo (age 9) tells me. A 90-year-old horse chestnut to be precise. Developers wanted to tear down the tree as part of their work building a three-story medical centre in Tonbridge in Kent. But Jojo and his brother Danny (age 11) were part of a group of protesters that rallied to save the tree from destruction. ‘And it was successfully saved,’ Jojo said. ‘It’s still there today.’

That first brush with activism led Danny and Jojo to learn more about deforestation and the challenges the natural world faces. Whilst the boys did become eco-warriors in their school last year, they believe schools could play a more active role in educating students about the environment as part of the standard curriculum.

In addition to protesting, Danny and Jojo wanted to find another way to make a difference and that’s when they started picking up litter. For more than a year now, the boys have been helping clean up the streets around Tonbridge, documenting their activity and what they find on Twitter and Facebook.

Their action has inspired people from the local community to join in and has garnered them national attention. Jojo told me about their Litter Wave campaign on Leap Day this year where they recruited an army of volunteers to help clean up more than 100 streets in one go. ‘At the end we turned all the litter we found into a wave of plastic,’ Jojo said.

‘That caught a lot of people’s attention,’ Danny added. ‘And after that quite a lot of people started to realise – it’s great to know and great to see as well that our town is getting better, but we still need to stay on the lookout. We can’t get distracted. You never know what can happen.’

Their passion for the environment is evident, both in their actions but also as they speak about their campaigns and what changes they want to see in society. ‘We need to take action because we only have a short amount of time before we can’t change anything and it’s irreversible,’ Jojo said.

Danny cites Greta Thunberg and her school strikes for the climate as a source of inspiration as well as his friend Lilly Platt in Holland who is a litter picker in her community too. ‘It’s not just that people are being inspired,’ he said. ‘They’re being motivated by what they see. It’s a good thing. The more people who notice it and the more people who understand what’s happening, the more people who can spread the news. Soon, we’ll hopefully have a huge group of people understand the same things and hopefully enough to clean up the planet.’

It was such a treat to sit down with Danny and Jojo to talk about litter picking, how the coronavirus pandemic has changed things for them and what they hope to see in the future. Check out our conversation (and the transcript) below and then be sure to follow them on social media to keep up with the great work they’re doing.

Thank you guys so much for sitting down with us today as part of Plastic Free July. Can you introduce yourself and tell us who you are and what you like to do?

On your Litter Kickers Twitter feed, I saw something about Commit to Your Street and I wondered if you could tell us a little more about that and how you got started picking up litter.

Danny: That was one of our posts. We decided we couldn’t go around the town all the time picking up everyone else’s streets. So we decided to put up a post for other people, to make people notice what’s happening. And we asked for volunteers who live on those streets to fend for themselves, to try to litter pick up their streets and keep it tidy. And we got a lot of volunteers. Thanks to that we don’t have to do everyone else’s streets, we can be more remote and go places where plastic is more dangerous. For example, a wildlife place. Because if an animal got close to plastic it could hurt it.

I know that that the coronavirus pandemic has kept all of us in our houses. We not been able to outside like we used to. How has that change what you guys are able to do with the actions you’re able to take for the planet?

Jojo: We usually go out early, a few minutes after we wake up if we wake up early and decide not to go back to sleep, and go out into town and do the litter picking then. And we have to wear some protective clothing like gloves and masks, not aprons.

Danny: The idea is, about going early in the morning, is that it’s less busy. You’ve seen the beaches and everywhere with the heatwave and the crowds. We don’t want to get caught up in the bustle so we go then. We have to follow the process we normally do, but it’s for the better and it’s a small change so we do it.

It’s been sad to see so much of the PPE – the gloves and the masks – left on the streets and in the communities. Have you seen a lot of that around you?

Jojo: There’s been many gloves that we’ve seen.

Danny: It’s a new kind of litter altogether. We’ve been seeing quite a lot of that, more earlier in the lockdown we’ve been seeing more of those than any other kind of litter. But now, because the lockdown has eased and the heatwave has come, it’s kind of gone back to the normal – lots of streets filled with bottles and cans. It’s really unfortunate when you see the beaches, for example yesterday at Bournemouth. It was covered in lots of pieces of plastic and bottles, sun cream, pretty much everything. The awful thing about that is – it’s the sea and something so close to the sea can easily drift into it. And once it’s in the sea, it’s guaranteed to cause harm to some sea creature. That’s really awful knowing that once something is in there you can’t really stop it.

Jojo: Although masks and gloves help protect you when you’re in town, it’s not helpful when it’s on the floor and it’s definitely not going to protect the animals. It’s going to harm them.

I saw on Twitter that one of the things you want to happen is the litter summit. What do you mean by that?

Danny: The litter summit is a government meeting where some officials from each place in the country meet together and agree new laws and make promises about how we can help the environment. The reason why I think we should have that is that previous governments in previous years, they’ve been saying that they’re going to do it, but they haven’t done it officially. They’ve waved it away. But now we can’t wave it away now. It’s too big now, it’s a massive problem. We can’t ignore it. We need to have a summit no matter what. Without it, we’re probably not going to have a planet. We’re just going to have a huge heap made out of plastic bottles and cans and bins filled to the brim. It’s just going to be a disgusting place to live. We can’t disrespect our forests and lakes and all these beautiful places anymore than what we’re doing now.

For people watching who want to take part, what would you say to them?

Danny: Please just take notice. There are three things I want people to understand. Please can you recycle, don’t be scared to get involved and try not to do any more harm. In the next decade or so, if people carry on doing this, this is going to be a huge devastation to our natural world, even more devastating than the comet that wiped out the dinosaur age, but there could be another way that we could turn it around. In the next decade, we could change absolutely everything. It could be enough to say sorry to our planet and the planet could forgive us. We could start a whole new era of respecting our planet and not thinking about doing harm to it again. This could be a huge moment for humanity or it could be a huge devastation to humanity. But we have to pick the right path. And I think everyone who is watching knows which is which.

Jojo: I just want to add something. One small difference can make a big change.

Danny: That’s one of our favourite quotes, and it’s actually true to be fair. One small thing can make a big change – that’s the ultimate message to every person, and that’s what keeps us motivated. I hope everyone else who’s watching is motivated by that too.