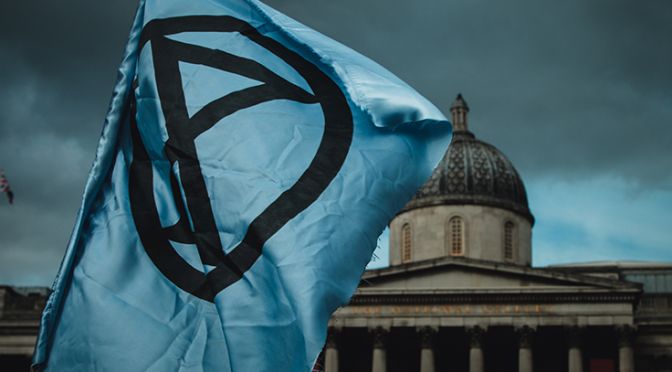 Throughout 2019, Extinction Rebellion staged a series of non-violent demonstrations calling on the UK government to take urgent action to mitigate the worst impacts of the climate crisis.

These demonstrations brought together people from all walks of life – those who call themselves activists and those who would never have thought they’d be the type of person to participate in civil disobedience.

The documentary called The Troublemaker shows the story behind the nation’s collective response to the climate crisis. Created by UK production company Passion Pictures and the multi-award-winning filmmaker Sasha Snow, the film ‘follows the personal awakening of two people as they learn to accept the reality of climate breakdown and decide to do something about it’.

One is Roger Hallam – a former organic farmer and academic who is the key strategist and co-founder of Extinction Rebellion. And the other is Sylvia Dell, a retired IT worker and mother of four who describes herself as ‘ordinary’.

The Troublemaker website says the film “delves deep into the ideas and emotions behind the international wave of civil protest that has emerged in response to the unfolding climate crisis.”

Chief among the topics is the current covid-19 pandemic. It has shown “how fast and how far we can move when faced with a global threat,” the site explains.

The film asks “if the science is right on climate change, what should you do?”

The filmmakers call The Troublemaker “the archetypal story of human civilisation.” They claim facing up to crisis and self-transformation through overcoming a threat, like the global climate emergency, is the epitome of the archetypal story.

But this time the threat is global and may prove fatal.

“Now that we understand more about what a ‘global crisis’ feels like, it can no longer be ignored. This is our opportunity to live life without lies, a life that offers both resilience and joy through the power of collective action.”

Learn more about The Troublemaker here.