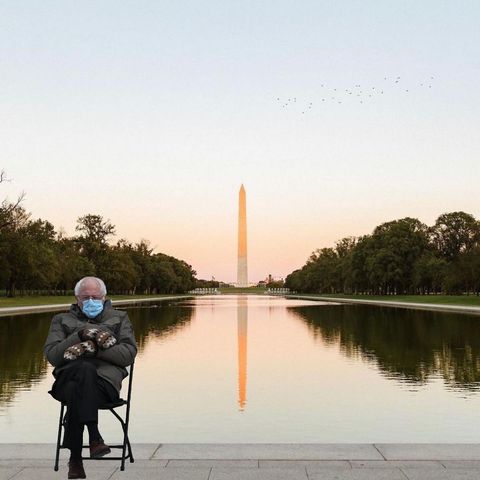 Those Upcycled Bernie Sanders Mittens Are Kind of a Big Deal

Forget the momentous inauguration. All eyes were on Bernie Sanders’ upcycled mittens.

There were a lot of memorable fashion moments at the inauguration ceremony of President Joe Biden. Namely, there was the stunning purple ensemble Vice President Kamala Harris wore. It was made by two Southern Black designers, Christopher John Rogers and Sergio Hudson.

His outfit has already been memed more times than the fly that appeared on Pence’s head during the Vice Presidential debate (and as the fly on Pence’s head). A bit of unmistakable Sanders pouting under his mask, arms folded across his brown slacks and jacket, and those cozy hand-knitted mittens in full view, making us a little regretful it wasn’t him being sworn in.

But the mittens are more than the meme-worthy sum of their parts. The Fair Isle pattern knit mitts were made by a Vermont school teacher, Jen Ellis. And, if anyone needs a nod this past year for their achievements, it’s the hard-at-work school teachers battling online learning amid the pandemic. (Especially teachers who can find spare time to knit mittens.)

The Trouble With Wool

Ellis says she used upcycled wool and plastic bottles for the mittens. And while wool can certainly keep those fingers Sanders loves to point warm, it’s fraught with some issues.

Wool is one of the most unsustainable and unethical textiles out there. Sheep are big-time methane producers, a greenhouse gas more potent than C02. And don’t buy into the party line about wool being “just a haircut.” Shearing can be severely painful for the sheep, according to animal rights organization, PETA (People for the Ethical Treatment of Animals).

“Shearers are usually paid by volume, not by the hour, which encourages fast work without any regard for the welfare of the sheep,” PETA explains on its website. “This hasty and careless shearing leads to frequent injuries, and workers use a needle and thread to sew the worst wounds shut—without any pain relief. Strips of skin—and even teats, tails, and ears—are often cut or ripped off during shearing.”

Ellis says she made the mittens from old wool sweaters. And that’s far better than using virgin wool. It’s also better than sending those old sweaters to a landfill, especially given the sacrifice made by the sheep. In fact, keeping as many old clothes out of landfills as possible is pretty urgent. Approximately 80 percent of all discarded textiles wind up in landfills, according to Remake World. And sending them to second-hand stores only makes matters worse. Many of these stores can’t handle the number of incoming items. Reducing, reusing, recycling, or, upcycling, matters a lot.

The mittens’ fleece lining comes from upcycled plastic bottles. And keeping those out of landfills too is another big win for the planet. Plastic waste is a huge problem. According to National Geographic, more than 90 percent of plastic doesn’t get recycled. If it’s not recycled, it goes to landfills or finds its way into our oceans (so do all of those single-use masks, by the way). Oceans are so full of plastic waste right now we could see swimming bits of plastic outnumber fish by midcentury.

In some ways, the Bernie Mittens can sum up the incoming administration’s agenda, too: supporting America’s working class, especially teachers; a layered commitment to sustainability; and a made-in-America pride. But they also offer us the comfort we’ve been craving and denied these last four years. Bernie’s cozy winter mittens are all of us.

Such bold fashion statements are not for everyone. And on such an already bold day, too, only Vermont’s finest curmudgeon could pull it off. Too bad there wasn’t any snow to pack into those mittens. Sanders probably has the strongest snowball game in all of D.C.