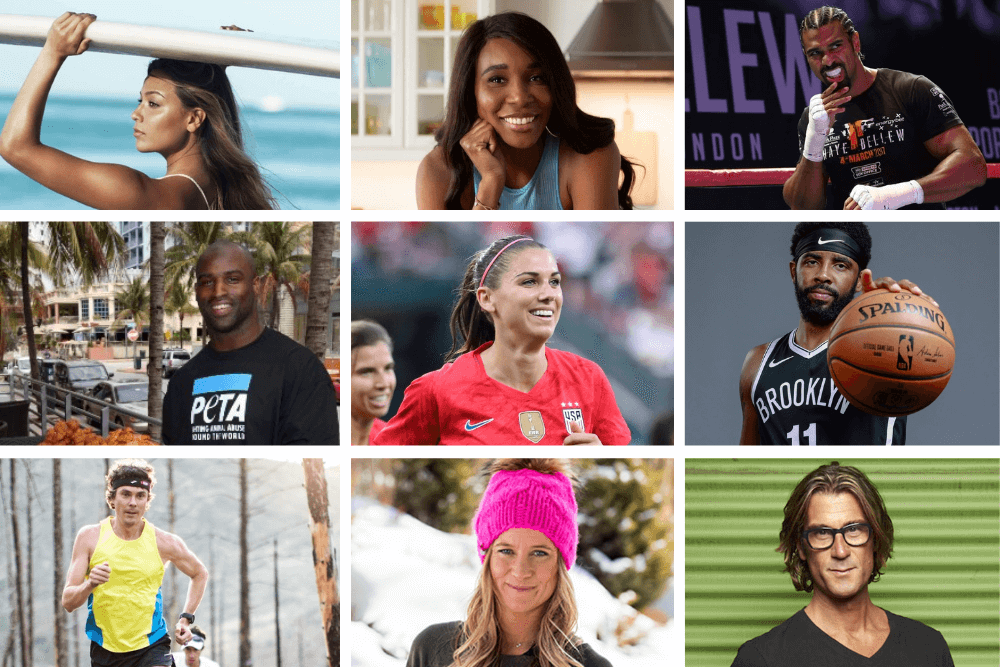 9 Vegan Athletes Who Got Better With Plant Protein

From surfing to soccer, basketball to boxing, these athletes show how a vegan diet has helped them reach the top of their game.

Gone are the days when athletes believe that animal protein is essential for awesome performances. Yes, a huge amount of nutrients and calories are required to sustain the energy levels needed to smash the competition. But a plant-based vegan diet can provide all of this and more, including reduced recovery times, improved mental clarity, and overall better health.

This Californian professional surfer has won the gold medal at the International Surfing Association Open Women’s World Surfing Championship in 2015 and 2016. Hailed as one of the top 50 female surfers in the world, Blanco is the product of a vegetarian family. The super surfer went vegan in 2013 after watching the documentary “Glass Walls” – a PETA documentary on factory farming narrated by Paul McCartney – and has promoted the lifestyle since then on her social media channels.

American snowboarder and three-time Olympic medalist, Teter grew up with a love of the great outdoors and its wildlife. However, her transition to veganism was inspired by a desire to improve her sporting prowess.

Of her plant-based diet, she explained to the Huffington Post, “I feel stronger than I’ve ever been, mentally, physically, and emotionally. My plant-based diet has opened up more doors to being an athlete. It’s a whole other level that I’m elevating to…it’s a new life. I feel like a new person, a new athlete.”

The list of this soccer star’s accolades is endless – Olympic gold medallist, FIFA Women’s World Cup Champion, and US Soccer Female Athlete of the Year – to name but a few. Described on the FIFA website as “one of the best forwards in the world,” Morgan went vegan when she fell in love with her rescue dog Blue. Subsequently, the super striker has become a vocal advocate against animal cruelty, partnering with PETA. She believes her plant-based diet is instrumental in improving her game.

This NBA basketball player is convinced that his vegan diet was responsible for his 13 game winning streak with the Bolton Celtics in 2017, crediting high levels of plant-based protein for high energy levels throughout his matches. During the recent Corona pandemic, the PETA “most beautiful vegan 2019” donated 200,000 Beyond Burgers to food banks in New York.

Shout out to this extreme marathon runner and old-school poster boy for vegan uber-athletes! After winning the Western States 100-miler seven years in a row, setting a record the Badwater 135 through Death Valley in 130° heat, Jurek ran the entire Appalachian Trail in just 46 days. The author of “Eat and Run,” this awesome athlete believes in the power of a plant-based diet to improve sporting health, endurance, and recovery.

It took an auto-immune disease diagnosis to switch Grand Slam superstar Williams to the power of the plant-based. Sjögren’s syndrome causes dry mouth and eyes, fatigue, and joint pain, and is incurable. However, William’s health and athleticism was greatly improved after adopting a vegan diet, so much so that her sportswear sibling Serena followed suit with a mostly plant-based switch. Last year, the tennis champ used her vegan know-how to launch Happy Viking vegan protein shakes. The post-workout drink contains 20g of plant protein from peas and brown rice, plus 9 essential amino acids and fibre, to aid recovery and digestion.

One of the “25 Fittest Guys in the World” according to Men’s Fitness Magazine, a midlife crisis led ultra-marathon athlete Roll to ditch meat and dairy. Sick of getting puffed after walking up a flight of stairs, the then 40 year old Roll decided to take action, adopting an extreme training regime and a vegan diet. Now, the Ironman champion has no regrets. As he told Men’s Health, “There’s a huge misconception that a) it’s going to be incredibly time consuming, or b) that it’s going to be more expensive than eating traditionally. That has not been my experience.”

Mocked by fellow players, fans and the press, this former NFL running back proved he had game even with his vegan diet. Explaining to Men’s Journal, the former Miami Dolphin says, “It’s not compatible with the lifestyle of a professional football player on so many levels. People get weird about it. They don’t understand it. It goes against what they believe.”

Physically demanding, the average NFL player requires 6000 calories and 200 grams of protein daily to maintain peak athletic fitness. Williams proved that cutting out animal products from his diet did not negatively affect his performance. In fact, it improved it.

Hitting the scales at over 16 stone, this professional British heavyweight credits his extra size to his vegan diet. Laying off the meat and dairy to speed recovery after a lengthy period of injury, hard hitter Haye soon found his performance in the ring improved dramatically.

Speaking to PETA, he explains, “Since cutting out meat I’ve felt healthier – cleaner, lighter. My skin, my nails and hair, I stopped getting dandruff, there are loads of really positive effects I got from that. I woke up brighter and fresher in the mornings. I remember after a meal I would just want to crash out and go to sleep. But now I can eat and feel more awake and my energy levels felt better.”