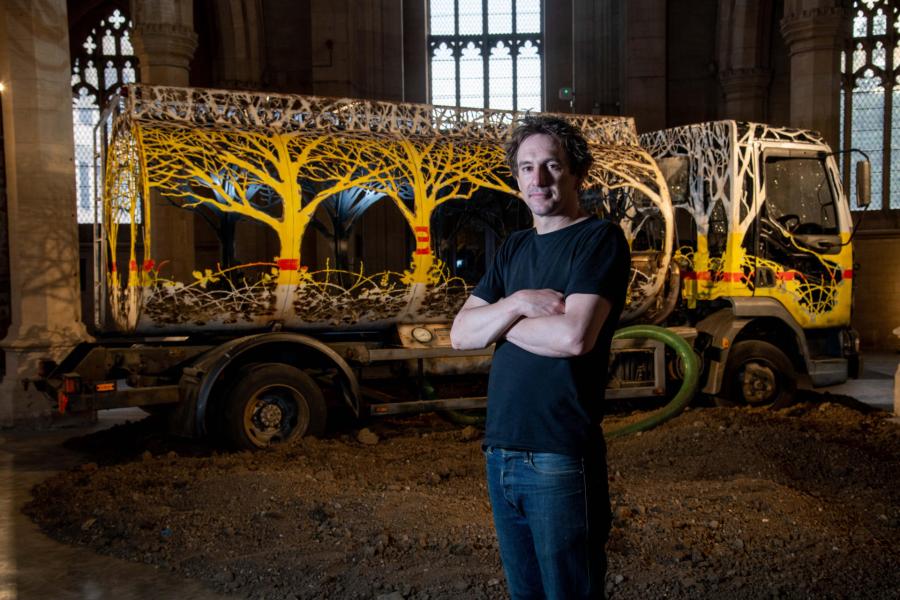 A British artist has turned the iconic but gas-guzzling Ford Transit into an environmental work of art. Plus, eco-sculpture Dan Rawlings has transformed a 10.5m petrol tanker into a 3D forest installation. The designs aim to make people think about the impact of the over-use of natural resources on the planet’s future.

Called “Future Returns,” Rawlings spent 4 months carving intricate trunks, leaves, and branches out of the tank’s frame. Now, the huge skeleton of the vehicle is placed on top of a nine tons mountain of earth as a message against waste. The petrol tanker had gone out of service before he bought it. “I think it’s 12 years old, but it’s obsolete. No companies would use it because it looks too old, even though it was perfectly functional. It’s ridiculous,” the self-taught artist told the BBC. “We’ve more than got the technology and the scientific ability to think about the future and to do things in a way that will stop pointlessly destroying everything.”

Growing up in Britain’s North Lincolnshire region, Rawling’s work is inspired by the area’s long and complex relationship with industrial production and fossil fuels. Using a plasma cutter on large-scale metal forms, he also wants people to think about how nature is “this weird force that I think people underestimate”. He adds: “I like to bring people’s attention to that, to make visible that truth. The foliage also draws attention to nature’s resilience and ability to find a way to thrive. Whatever we take from nature, it always finds a way to take it back.”

As well as cars, Rawlings designs include planes, grain silos, and road signs. However, the reworking of Ford Motor’s arguably most well-known fossil-fuelled vehicle is timely. It comes as the company prepares for the launch of all-electric versions of its delivery fleet.  The car giant will start shipping E-Transit to customers later this year. This is as part of a wider plan to invest more than $30 billion in electrification by 2025.

“Future Returns” is on show at the 20-21 arts centre in Scunthorpe, UK until 25 September.