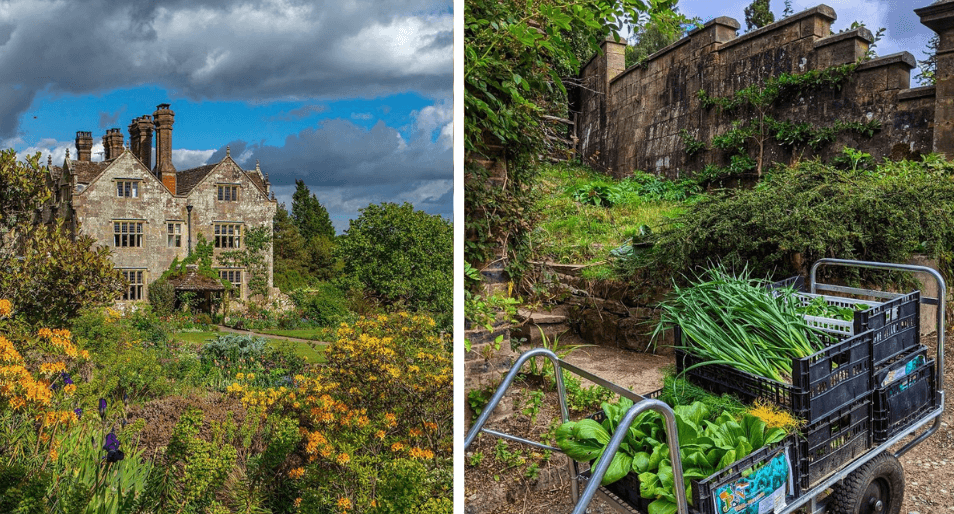 6 UK Hotels With Kitchen Gardens for a Sustainable Getaway

Kitchen gardens are revolutionizing hotels with the most sustainable food possible.

There’s something rather lovely about eating food sourced, at least in part, from your own garden. To dig into a pie, for example, and be able to look outside and see the tree from which your apples came is a certain kind of deliciousness.

You know what’s even better than this? A meal sourced from mere metres away that you haven’t even had to make.

Overseas travel has been, as we all know, largely off the table this year. In its place, we’ve had a series of close-to-home breaks. They’ve not only provided a welcome reprieve from the sameness of our own four lockdown walls, but have often also been a boon to an environment overburdened by flights and tourism’s other associated eco-costs.

Choosing a hotel where the food on the menu is grown within the grounds not only reassures you that you are eating seasonally, but also that the food mileage on your meal is less than zero.

UK Hotel Kitchens Growing Their Own

One of my first experiences of a kitchen garden meal was at Harrogate’s Rudding Park Spa. Earlier in the day, I toured around the herb and vegetable rows. I even plucked a sun-warmed tomato right off the vine. There was a hard-to-describe pleasure, later that evening, in eating a jaw-tinglingly delicious gazpacho in Horto (one of the restaurants within the hotel, both inspired by and named for the kitchen garden) made from those same vines.

Rudding Park Spa has many other highlights that make it a delicious option for a weekend away, not least its three-story spa building, with glass walls offering serene views over the vast ground, the kitchen garden included. And yes, perhaps you’d expect spa-excellence from a hotel in a location traditionally associated with restorative spring waters, but Rudding Park is genuinely something else – from its mind and sense zones and infinity pool to its rooftop spa and garden.

Located near Bath (a dreamy location already) Lucknam Park features extensive grounds, sumptuous rooms and an incredible spa. Arrival, in itself, is an event, with a tree-flanked drive so long that the hotel — a beautifully imposing, yet welcoming structure — is, for a long time, not even visible. The kitchen garden features everything from edible flowers – the daintiest addition to toothsome desserts — to baby vegetables to accompany your perfectly executed mains.

Part of the Stafford collection, Northcote has been home, for the past 20 years, to the Obsession festival, a decadent celebration of food and wine. But you don’t have to wait for this annual event to experience the best of this Lancastrian bolthole. The kitchen garden infuses just about every drinking and dining experience you’ll have here, from fruits and herbs in the cocktails, to incredible fruit and veg in the Michelin-starred restaurant, presided over by Lisa Goodwin-Allen.

Deep in the lush Sussex countryside, this 16th century hotel has fewer than twenty rooms and suites – which means that the produce of its lushly planted gardens can be generously shared among guests. The kitchen uses everything it grows. At the end of the 19th century, it took three years to wall the elaborate kitchen garden. Think coloured beetroots, pickled rhubarb, quince, chard, spinach, parsnip and mint.

If its location, overlooking Lake Windemere, is not draw enough, The Samling’s comfortable rooms and suites, each with their own individual character, plus its 67 acres of wander-worthy grounds, is certain to be. Expect to start each meal with an amuse bouche of ingredients. They’re all carefully selected from the kitchen garden. Blackberries and hazelnuts abound in autumn; wild garlic and a variety of greens in spring.

Synonymous with country comfort, the Pig hotels have become something of a weekend escape legend. That;s not only because of their idyllic settings and boutique vibe, but because of the relaxed, yet attentive, service and eclectic décor. Head to the original porcine incarnation in the New Forest, where the kitchen garden blazes with colour and variety — and the promise of ending up on your plate. What can’t be sourced here comes, largely, from within a 25-mile radius.

Is your favorite hotel missing from this list? Drop us an email with your suggestions.