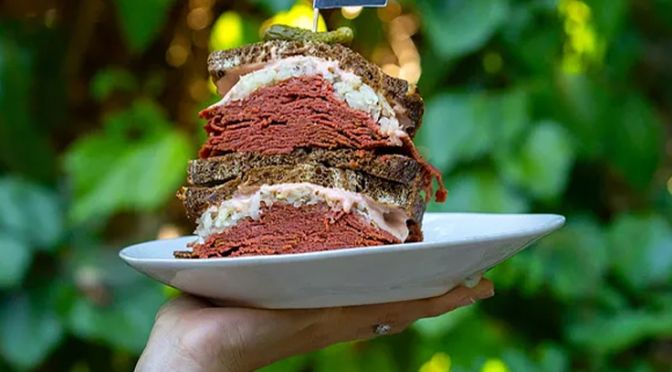 Almost 100 years ago, Morris Gross and his brothers emigrated from Romania to America. Morris found work as a dishwasher in a deli on New York’s Lower East Side.

Through hustle and determination, he worked to turn the American Dream into a reality, becoming the owner and operator of several delis in NYC.

Hustle and determination are two elements that his great-granddaughter Jenny Goldfarb has in abundance. The founder of Unreal Deli, Golfdarb has reinvented corned beef for plant-based eaters and is showing up in delis, restaurants, and retail butcher shops across America.

“Corned beef and pastrami, and those classic New York deli meats were in my lineage and on my tables growing up,” she says. After attending business school, Goldfarb moved to the West Coast and found jobs in the tech sector. She re-discovered a passion for food when she went vegan in 2014.

As a busy wife and mum of two children, she knew she needed to find a way to make vegan food delicious and fast. She started a weekly blog experimenting with fruit and vegetables, grains, and nuts. That led her to good alternatives for burgers and sausages, but one thing was missing: authentic, New York-style deli meat.

Goldfarb laboured over a recipe to recreate the taste and texture of the corned beef she grew up eating. It’s made from local organic beets, chickpeas, tomatoes, and a complex blend of 10-12 spices.

And when friends and family tasted it, they told her this was a business opportunity.

“I didn’t know anything about the food business…but I took some moves out of my great-grandpa’s playbook and learned everything on the job.

“I believe in this message of putting the messy version out. Throw something out there and see what comes of it.”

Renting a commercial kitchen, Goldfarb created small batches of her corned beef and started taking samples to the owners of the local LA delis. “I said to myself, if this can sit side-by-side with the kings of corned beef, then it can go anywhere. I said if I can sell the big iconic delis of Los Angeles then I can bring this to the masses.”

Eighty percent of the owners that Jenny spoke to agreed to stock her Unreal Corned Beef. And they kept coming back for more.

In this episode of Eat for the Planet, Golfarb speaks with Nil Zacharias about her journey, the way serendipity meets hard work to create opportunities, and her ultimate aims for the business.

Available for nationwide delivery from her website, Mrs. Goldfarb is also launching pre-made sandwiches in 58 Whole Foods stores in Southwest America. She is also lining up delis and restaurants in New York City, Boston, and Washington, DC.

And with a recent investment from “Shark Tank” investor Mark Cuban, she’s launched new retail products and new options in a number of stores including Quizno’s, Mendocino Farms, and Veggie Grill. And, of course, it’s available in delis like Los Angeles’ iconic Cantner’s.