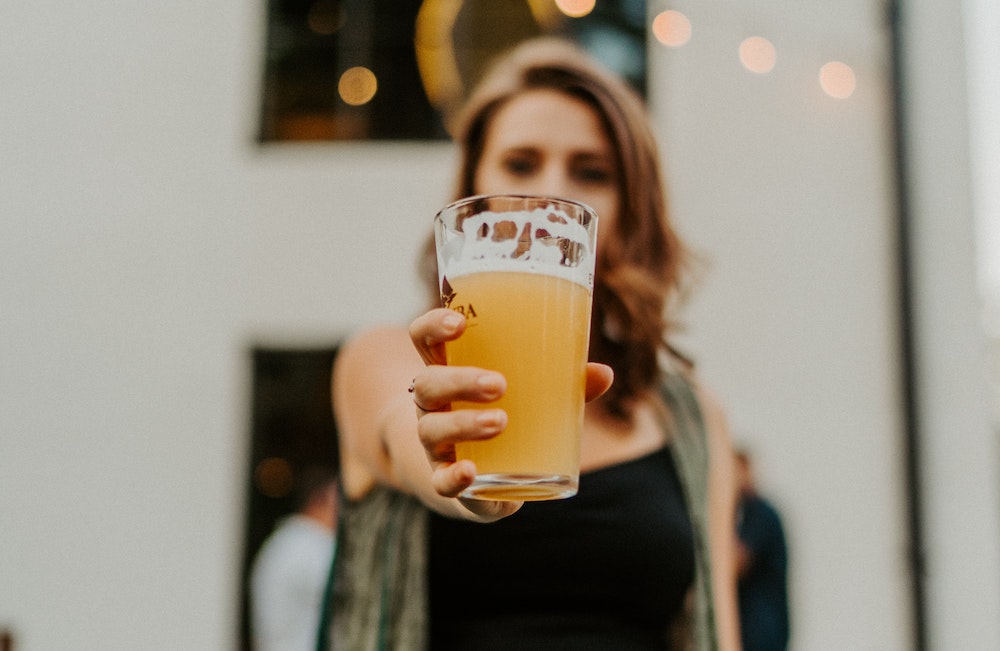 Whether you’re craving a crisp lager, salivating over a stout, or in love with IPA, there’s a vegan beer for that.

In theory, apart from the occasional addition of milk or honey, you would assume that a drink made from water, hops, and barley is vegan. But many brands contain hidden animal ingredients. Traditional manufacturing often involves a filtration process that uses animal-sourced fining agents. These make the beer crystal clear and supposedly more appealing by removing the suspended yeast residues.

However, some of the animal products include gelatin from animal skin and bones, dried fish swim bladders, and crushed insects for added colour. Mmmm, not so appealing now. Compare this to the vegan beer fining process which uses plant-sourced charcoal, leaf gelatin, and Irish moss seaweed.

Do proceed with a little caution when buying. No law requires beer manufacturers to disclose non-vegan ingredients on the label, so always check the brewery website or use a tool like Barnivore.

The fact that major brewers like Guinness have committed to vegan beer in recent years suggests that the trend is set to grow and grow. Last year alone, Australian beer brand Yulli’s opened a vegan taproom in Sydney; Massachusetts saw the launch of Rewild Plant Food + Drink; and the Hinterhof German Beer Garden landed in LA.

Whilst there’s a thriving niche craft beer market, a few big brand names also appear on the list because of their animal-free and sustainability credentials as well as being readily available.

This beer is mixed with real grapefruit juice. So it has a refreshing tang and is a great thirst-quencher on a hot summer’s day. “Radler” means cyclist in German and this is often called a “bicycle beer”. Cyclists like to drink this Austrian beverage whilst cycling the Alps. Equally fantastic with spicy dishes and fresh-fruity desserts. Prost!

The Purity bunny logo pays homage to the rabbits that led to the discovery of Upper Spernall Farm, the home of the Purity brewery today. Signature beer Bunny Hop is a hazy pale ale that is vegan friendly and gluten-free. Oats are added to bring about the cloudiness plus an exotic blend of El Dorado, Centennial, and Azacca dry hops. Unsurprisingly, the bold flavour is a perfect match for hot and spicy Mexican, Indian and Thai meals. Good to know; Purity’s spent yeast goes to the local pigs and the used hops are used as fertiliser on the farm!

Ken Grossman started Sierra Nevada with a brewhouse in a shed in 1980. Now, Sierra Nevada’s 100% vegan craft beers have taken the US by storm. The company’s “reduce, reuse, recycle” mindset and use of alternative energy makes its beers taste even better. The seasonal line-up caters for those skiing the slopes, reaching the summit, and setting up camp. The Wanderland Nectarine is a juicy, golden sunset and perfect for a juicy, golden sunset.

Dutch brewery Grolsch has been making beer for centuries. It’s best known for its pale lager, the Grolsch Premium Pilsner. This naturally green hop brew has a crisp finish and malty undertones.  The good news? Readily available, most Grolsch beers are vegan with the exception of its “Milk Stout”. Even better, the new Grolsch brewery is one of the most innovative in the world, with 99.8% of waste being recycled.

Cervecera Artesana’s craft beers are made from pure local water from a Spanish spring in the upper Iregua river basin, surrounded by beech and oak trees. Quality raw ingredients mixed with cutting edge technology creates an exemplary beer. Palax is pale golden, with hints of lemon on the nose and a sharp, clean bitterness. Delightful paired with tapas. More delightful if drunk in Spain!

A sweet and spicy offering from a tiny brewery in the West Midlands of England. With its light malty base and fresh passion fruit zing, this sweet vegan beer is super drinkable. Made by friends – The Green Duck Beer Company is run by 3 mates – to be drunk with friends!

Trained by Germans in the art of beer-making, Seibei Nakagawa created Sapporo in 1876. Now, Japan’s oldest brand and the best-selling Asian beer in the US, Sapporo products don’t contain any animal ingredients. Sapporo Pure is a superior light lager for those who want the beer taste without the beer belly. With only 90 calories and 2.4g carbs, Pure’s soft-golden hue looks beautiful and offers floral notes in every sip.

Ubiquitous Budweiser is probably one of the most well-known beer brands in the world. But did you know that Bud brewing company, Anheuser-Busch, is more than a century-and-a-half old with strong German roots? Plus, Budweiser, Bud Light, and Bud Light Lime-a-Rita are suitable for vegans? Budweiser is brewed with only the finest two-row and six-row barley malt, hand-selected from regional growers all across America. The company has committed to 100% of electricity from renewable sources and 100% of packaging made from recycled content or returnable by 2025.

If you fancy a drink that feels like a slap in the face, Resin is the IPA for you. Dank with tons of pine and (unsurprisingly) resin notes, this beer stings but it feels so good at the same time! Sixpoint is a completely vegan Brooklyn-based brewer famed for seasonal flavours and gorgeous bottle and tin design.

Originally brewed with honey, Bumble Beer went completely vegan in 2017. Now the UK micro-brewery only works with organic producers and donates 10% of profits to bee-saving charities. Furthermore, Bumble aims to become a zero-emissions company within the next 10 years. Note bene – Bumble also does a Chronic CBD-infused 40% Gin, in case you’re interested!

This Belgian-style craft brew earns a place on this list for the sheer gorgeousness of its tin. The Ommegang Brewing Company is completely vegan and opened the first farmhouse brewery in the US in more than 100 years in 1996. “Game of Thrones” fans can enjoy show-inspired brews. Neon Rainbows is the unicorn of IPAs; hazy, irresistibly and gone in a flash.

Interested in vegan wine and chocolate? Find out more here.