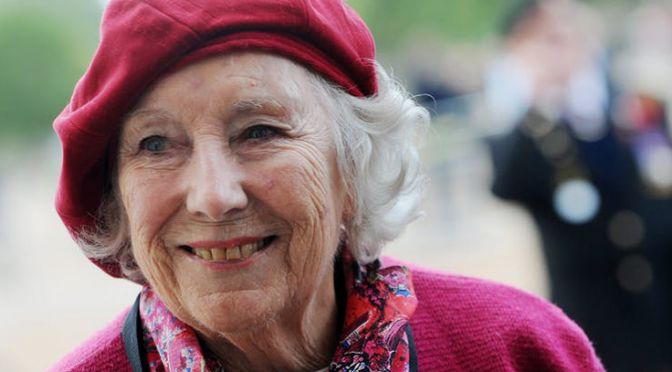 ‘We will meet again,’ the Queen declared in an April 5 Coronavirus address the UK. Suddenly, a line the British people indelibly associate with the second world war was in the news again. The monarch’s reassurance to people separated from loved ones by lockdown struck a chord.

The phrase will reverberate again in the UK on the 75th anniversary of VE Day, when the country marks the end of the conflict. After the Queen makes another address at 9pm, Britons will be invited to sing We’ll Meet Again, the song made famous by the original ‘Forces’ Sweetheart’, Dame Vera Lynn, who is now 103 years old.

In August 2005, I interviewed Dame Vera. As a university lecturer specialising in war literature, I was fascinated by the way that she was relentlessly dragged back to the past (the second world war) and under equally relentless demand to sing a song about the future. A courteous handwritten reply came back to my request for an interview, inviting me to her home in Ditchling, East Sussex. As I drove, the weather was bright and I smiled to myself at the thought that I was going to meet Dame Vera on a ‘sunny day’.

Born in 1917, Vera Lynn began singing at the age of seven in the clubs of east London. She grew from child star to professional crooner, featuring on records with dance-band leaders Joe Loss and Charlie Kunz and making her first radio broadcast in 1935. In 1937 she became a vocalist with British bandleader Bert Ambrose and his orchestra. By 1939, Lynn was a well-known stage and radio performer on the verge of a solo career.

It was then that she came across the song that was to make her a national icon.

Lynn discovered We’ll Meet Again in the autumn of 1939. It was the work of the well-established London-based songwriters Ross Parker and Hugh Charles, with Charles providing the lyrics for Parker’s melody. Lynn first sang it (along with You Can’t Black Out The Moon) that autumn on tour with the Ambrose Orchestra.

Though today We’ll Meet Again is inseparable from the second world war in most people’s minds in the UK, it was actually Lynn who forged the connection, turning a song about absence in any situation into a classic expression of wartime optimism. Lynn was broadcast singing the song throughout the war and its message of hope and resilience lifted national morale.

As she wrote later in her 1975 memoir, Vocal Refrain: ‘Ordinary English people don’t, on the whole, find it easy to expose their feelings even to those closest to them.’ We’ll Meet Again would go ‘at least a little way towards doing it for them’.

In later years, the song, with its reminders of home and exhortations of courage, has become an indispensable part of national commemorations.

And, with its swooping and strangely haunting melody, it has entered into popular culture. It forms an ironic accompaniment to the explosion of atom bombs in Stanley Kubrick’s Dr. Strangelove, or How I Learned to Stop Worrying and Love the Bomb (1964); it is deployed with alienating effect in the Pink Floyd song Vera (The Wall, 1982); and it provides the eerie aural backdrop to the Tower of Terror ride in Walt Disney World, California.

But when Lynn began singing it at the age of 22, she had little idea that she would be singing it for the rest of her life.

On that August day in 2005 it was an 88-year-old Dame Vera Lynn who opened the door to me: elegant, striking, perfectly made up. She welcomed me warmly and went off to make tea. I sat in her large sitting-room. There were photographs everywhere, family intermingled with the great and the good. There was Dame Vera at Buckingham Palace and there she was with … was it really Bing Crosby?

Dame Vera came back with the tea and we began to talk. Knowing myself what it was like to become immersed in the second world war, I asked if she ever got tired of talking about it. Never, she replied – how could she when so many young men had given their lives in it?

I was itching to hear her sing it, but I knew that she had stopped performing publicly and was too shy to suggest it to her. But what if I sang it to her? No singer, I launched myself into it and to my joyous amazement, she joined in.

I finished my list of questions and put my notebook away. Dame Vera sighed with relief. ‘Shall we have another cup of tea and now have a proper chat?’ she asked. And so it was that we began to talk freely. I have no notes of this part of the conversation but details stand out in my memory.

How she felt like a personal family representative when she visited British servicemen in hospital in what was then Burma. How the heat made her lipstick run. How she spent her clothes coupons on a tight-fitting pink chiffon dress. How important it was to look attractive to wounded soldiers who hadn’t seen their womenfolk for months, even years.

It was over all too quickly. We said goodbye on the doorstep. ‘Perhaps…’ I began, tentatively, ‘… we’ll meet again some sunny day’, sang Dame Vera, quick as a flash.

Most likely, I won’t meet her again. But, as the Queen understood, what keeps us going in times of war and pandemic is the thought that we will be reunited with our loved ones, when the blue skies drive the dark clouds far away.