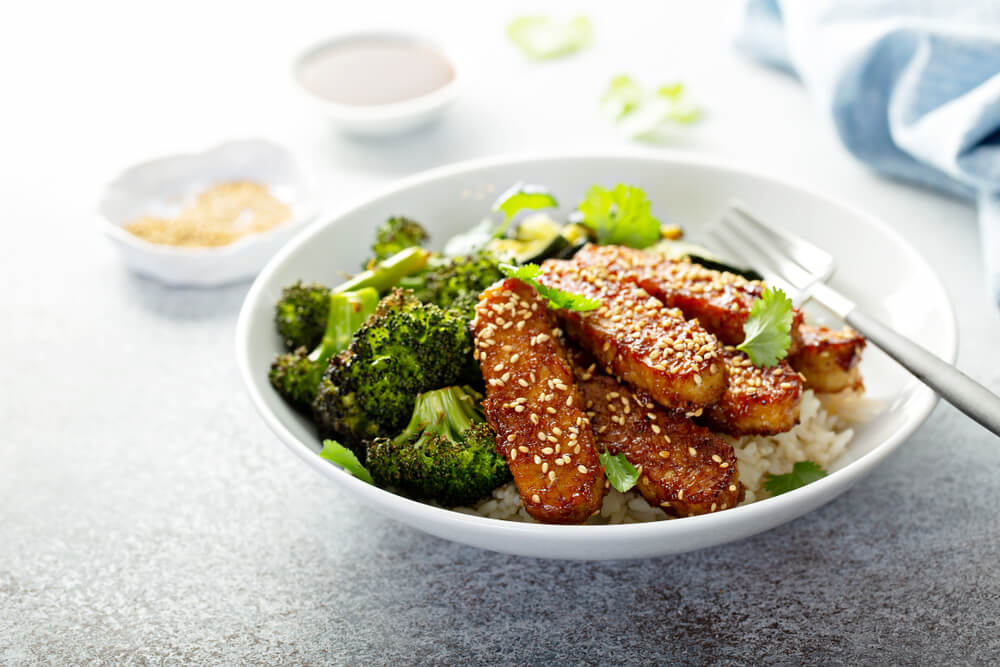 What Is Tempeh? The Best Vegan Protein You Never Heard Of

Haven’t heard of tempeh yet? This vegan protein is full of benefits for you and the planet. Here’s what to know.

When you think of vegan protein, a few culprits usually come to mind: beans, maybe tofu (technically a bean). Or maybe you think of something like a Beyond or Impossible Burger, both of which look, cook, and taste like meat. But one staple vegan protein for a large chunk of the planet may not be top of mind: tempeh.

Rooted in Indonesian culture, tempeh is a traditional food made from soybeans. The beans are fermented and compressed into dense, chewy cakes with a meaty-like texture. Where tofu is creamy and smooth, tempeh is filled with chunks of whole beans, softened through the fermentation process. It has texture and a dense mouthfeel that contrasts from tofu.

Tempeh can be made from other beans as well. Mung, garbanzo, and black beans, for example, may be common substitutes. The beans can also be processed and mixed with wheat gluten—another common vegan protein called seitan–to form a hybrid protein source.

Looking for a low-fat high-protein food? Like all vegan protein, tempeh may be a good choice. A 3-ounce serving contains 15 grams of protein and just nine grams of carbs. Credit its compacted nature for its high protein content—tempeh’s 15 grams per three-ounce serving compared to tofu’s six.

But it’s a real powerhouse when it comes to manganese, boasting 54 percent of the RDI. It’s about 18 percent of riboflavin and magnesium, a good source of phosphorous, and niacin. In other words, tempeh is healthy.

Soy products, particularly the isoflavones, have also been linked to heart health. Regular consumption of soy-based foods like tempeh has been linked to decreased LDL (bad) cholesterol levels as well as decreased triglycerides—markers for heart disease.

The fermented nature of the soy cakes may make it more digestible for people with soy allergies, too.

Microbes have played important roles in our food for millennia and tempeh is one of the best examples. Bacteria and yeast that break down sugars also break down the phytic acid in soybeans. For some people, phytic acid can disrupt digestion and nutrient absorption.

There’s another benefit, too: probiotics. Unpasteurized fermented foods like tempeh can provide a healthy dose of probiotics, which may help to balance the gut’s healthy bacteria. These bacteria, however, are typically destroyed during cooking.

But tempeh is also rich in prebiotics—fiber that supports the growth of healthy bacteria. These foods for healthy bacteria have been linked to a number of health benefits including healthier elimination, reduced inflammation, and improved brain fuction.

Unlike beef and other animal-based protein sources, tempeh is one of the better foods for the planet. Claims that soy is destroying the rainforest are misleading—it’s soy cultivated for beef production, particularly in Brazil, that’s the real issue. Beef production is linked to egregious deforestation of the Amazon at such a massive scale that the former carbon sink is now producing more emissions than it sequesters.

But soy can be one of the best low-impact crops produced. According to the Sustainability Alliance, 95 percent of U.S. soy farmers participate in conservation programs and use sustainable production practices. “Since 1980, U.S. soy farmers increased production by 96% while using 8% less energy,” the Alliance notes. “94% of U.S. soybean acres are non-irrigated and 75% of sediment is removed by conservation buffers, improving water quality.”

Where to Find Tempeh

Peruse your local supermarket or health food store and you’re likely to see long, slender packages of tempeh alongside tofu. It’s easy to miss, but it’s usually there. Trader Joe’s sells a private-label version of it, too You may also find it in Asian food markets as it’s a staple in Indonesian cuisine.

Tofurky, which is best known for its meaty, vegan Thanksgiving roast, actually got its start as a tempeh brand. Founder Seth Tibbott had his first taste of tempeh in the late 1970s at The Farm, a commune in rural Tennessee. These little soy cakes would become his first product, and even turned into vegan drumsticks alongside his popular holiday roast. Now the brand sells tempeh nationwide.

Of course, it’s also possible to make your own vegan tempeh cakes, too. It’s best to read through the ingredients fully before you start as you’ll need things like tempeh starter, often called  Rhizopusmold spores. Then you need to leave it to ferment at a warm temperature. But it’s easier than some other home fermentation processes.

How to Use Tempeh

Tempeh can be eaten straight out of the package or steamed. But it’s also great sautéed until lightly brown and crisp. But there are lots of other fun ways to use it, too.

One popular tempeh method is turning it into bacon. Eat it alongside waffles or French toast or pile it into a vegan BLT.

You can crumble it into a bolognese sauce. Or use it as a taco or lasagne filling.

Tempeh also makes a great burger. It can be marinated as-is and grilled, or crumbled and mixed with other DIY burger ingredients such as oats, carrots, brown rice, or black beans.