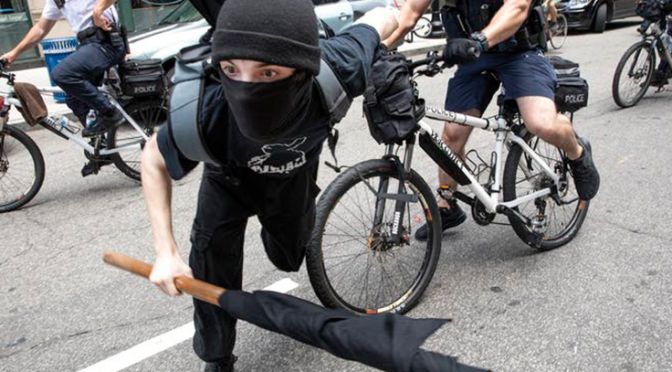 The movement called ‘antifa’ gets its name from a short form of ‘anti-fascist,’ which is about the only thing its members agree on.

President Donald Trump and some far-right activists and militants have claimed antifa is allegedly conspiring to foment violence amid the protests sweeping the U.S. In my forthcoming book, ‘American Antifa: The Tactics, Culture, and Practice of Militant Antifascism,’ I describe antifa as a decentralized collection of individual activists who mostly use nonviolent methods to achieve their ends.

Their goal is to resist the spread of fascism. That word can be an inexact term, but generally antifa activists see fascism as the violent enactment and enforcement of biological and social inequalities between people.

Fascists go beyond viewing particular categories of people as inferior, based on gender identity, race and ethnicity, religion and sexual orientation. They believe it is imperative to use violence to oppress and ultimately eliminate those groups. In addition, they use violence to oppose their ideological enemies, even if they are from groups they believe are not inferior, such as heterosexual white men.

The initial anti-fascist movements were founded in Europe and North America between the world wars, and were primarily organized by anarchists, communists and socialists – three groups that were frequently targets of fascist violence.

The modern-day anti-fascist movement in the United States, including antifa, grew out of the Anti-Racist Action Network, a decentralized activist movement resisting racist skinhead subcultures and public demonstrations by neo-Nazi and Ku Klux Klan organizations in the 1980s and 1990s.

Anti-fascists’ objections aren’t simply that they disagree with fascists. Their problems with fascism are much more fundamental.

My own research has found that a significant proportion of anti-fascists are women, people of color, members of LGBTQ communities, or otherwise have some characteristics fascists seek to control or eliminate.

These anti-fascists, therefore, often see fascists as a threat to their personal existence, and their physical and emotional well-being – as well as presenting threats of violence or vandalism to their communities and shared gathering spaces. They perceive their opposition as very much in personal and collective self-defense.

Because opposing fascism is a viewpoint rather than a formal organization, people’s actions vary widely. Informal or everyday anti-fascism can include speaking out against bigotry, standing up for victims of fascist harassment or confronting fascists in public places. Generally, these are relatively spontaneous actions that happen when anti-fascists encounter fascism in the normal course of their regular lives.

More formal anti-fascism can include large, well-funded mainstream organizations like the Anti-Defamation League and the Southern Poverty Law Center, who monitor fascist activity and provide the public information on its scope.

But the antifa label is most often applied to smaller-scale groups of like-minded people who live in the same community, working to prevent fascists from threatening their targets and from attracting new followers.

These groups are rarely militant or violent. Most of them engage in commonly accepted forms of political activism. For instance, anti-fascists often work to find out where fascist groups and people are active in an area, and then share that information with the wider community, bringing that activity to public attention.

Anti-fascist activists also take advantage of the general social stigma associated with being a fascist, and identify people who participate in fascist events or post fascist messages online.

Culture is another part of anti-fascist work, including art and music. By creating T-shirts and stickers with inclusive messages, and hosting concerts, film screening and art shows, anti-fascists work to create an environment of inclusion and equality that doesn’t directly attack fascism but simply exists in opposition to it.

There are more militant anti-fascists, too, who mostly engage in non-militant activism but are willing, at times, to use more confrontational tactics. These people are more open to counterprotesting, sabotage and the use of force, which includes acts of violence.

The varied and decentralized nature of anti-fascist efforts means it includes virtually anyone who opposes violent enforcement of social inequalities to engage in activism. A diverse range of participants and tactics falls under the umbrella of a broad effort to stop fascism.