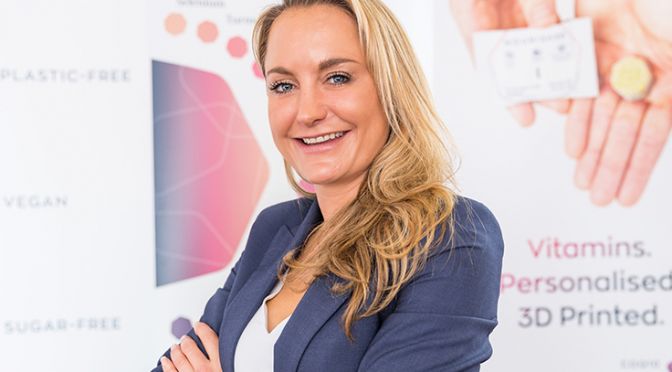 What’s In Your Stack?

The serial entrepreneur and inventor was on the other end of a Zoom call to tell me about one of her latest brand projects – Nourished, which produces personalised 3D printed gummy stacks with seven unique layers of vitamins and nutrients.

But before we got into the details of her current project, I wanted to know a bit more about her background.

She grew up in New York and Washington, DC, she told me, where her dad worked for the government. She went to university in Colorado before getting her MBA at Lancaster Business School in the UK. And her final project at school was to come up with a business concept and go through the launch experience.

Her start-up – which Melissa said was a sort of precursor to Money Super Market – was so successful that she stayed in the UK after graduating and ran the business for five years.

‘At the end of the day, I was making more money than I thought I’d ever see, but I wasn’t loving it on a daily basis. My passion for it, the challenge around it – it kind of fell down. I felt like it was the same thing every day. I didn’t feel like I was making a positive difference.’

A vegetarian since age 17, Melissa told me that she doesn’t like chocolate, but loves gummy candy. She struggled to find any vegetarian-friendly candies that didn’t taste like wax, so she set out to make her own. But by the time she’d finished experimenting in the kitchen and settled on a decent base recipe, had a few products and a website, she’d run out of money.

‘I was knocking on the doors of people like Tesco and Sainsbury’s with samples from my manufacturer. I didn’t even have real packaging yet because I didn’t have money to pay for it.’

She remembers the buyer at Tesco telling her that no one cared about the product being vegan – that it shouldn’t be part of the selling point.

‘We laugh about it now because the vegan movement is so huge, but at the time it was really early. I’m usually early in my career…’

Her persistence and legwork paid off. She landed an 800-store listing in America with Stop & Shop and was able to turn the machines on and launch the business.

‘Within three years, I was selling that product in 40,000 stores globally, making it one of the fastest growing consumer brands in the world – certainly in candy.’

Approached by keen buyers, Melissa sold the business and set out to tackle a challenge that had been bugging her over the years: traditional manufacturing.

‘You have to make hundreds of thousands of the same thing,’ she said. ‘It’s super slow and there is no way to make enough product variations to ensure that everyone goes home with something that they want. My brain’s way of going around that and finding a solution was to create a device that allowed the customer to make their own product – to walk out of the store with exactly what they wanted.’

Melissa said that while the concept was successful and did a great job – it was fun, delightful, educational – it still wasn’t ticking the right boxes for her.

‘At the end of the day, it let you make custom candy; it wasn’t changing the world in the way I wanted to.’

So she sat down with her team and they asked themselves: what in the world needs personalisation more than anything else and isn’t currently getting it from what the marketplace can offer?

The future of health?

‘It was really clear – glaringly clear,’ Melissa said. ‘Health and wellness and nutrition are not customised right now and it’s insane. The fact that the clothing I’m wearing is more personalised than the medicine and food I put in my mouth – that’s crazy.’

While Scripted is working its way through the ‘understandably long and arduous’ pharmaceutical approval process, Melissa and her team are focusing on the Nourished stacks.

It’s not just about the cool tech for her. It’s about demystifying nutrition and making it easier to understand what people need and what the benefits are.

‘People are really interested and want to do the right thing by their health, but they’re being bombarded by so much baloney. You have to pull it back and give people really trustworthy, authenticated information. It’s backed by real science. People will take value from that as well.’

Melissa developed an algorithm linked to a simple questionnaire on the Nourished website – it asks for information about people’s daily health and lifestyle habits as well as future-oriented goals. The algorithm then produces a recommendation of seven nutrients – out of 32 at the moment – and explains why those were chosen and what the health benefit will be.

The 3D printer then creates a gummy stack with the seven layers of nutrients, each one individually wrapped in plastic-free, home compostable packaging. Customers are sent a month’s supply of stacks direct to their door, making it simple and convenient to get the supplements they need.

The number of potential combinations for the Nourished stacks is staggering – there are over 1 trillion different ways to combine the vitamins, minerals, superfood and active ingredients Melissa uses. They’ve made hundreds of thousands of combinations for people already, each one unique.

There are trends however.

‘What we’ve found over the past nine months is that there are a lot of people who have a similar goal for their supplementation,’ Melissa said. ‘Originally, the highest ranking goal was to manage stress and have more energy. Then when COVID hit it was immunity – obviously. Now we’re seeing the biggest goal has shifted to losing weight or toning up.

‘So we find that people may have one or two ingredients in common, because they have similar goals – it’s like the culture and community is shifting in a sea. We’re all unique particles of water, but we’re all moving in the same direction.’

While the product is currently only available in the UK, Melissa has plans to expand to the US as soon as the dust settles from the pandemic and the political drama that has been unfolding recently. She has her sights set on Europe too, but that will depend on the Brexit outcome at the end of the year.

I asked Melissa about being a female entrepreneur – especially in tech and innovation – and whether she has encountered gender bias that has made things more difficult for her to progress. She said that in the beginning she remembers being the chairman of a board and having to take the minutes of the meeting as well because she was the only woman in the room. And she also recalled that buyers at certain supermarkets hit on her during pitch meetings.

But she said that things have definitely gotten better for women in industry lately. She’s also grown in confidence and experience and said that if anyone tried to disadvantage her now, it would seem almost funny to her. ‘It’s not going to work out very well for them! … I would never underestimate someone I’m negotiating with and I think anyone who doesn’t pay that respect back to me or any female is making a grave mistake.’

‘What I’ve chosen to do is not think about it,’ she continued. ‘We can all talk about times we’ve been disadvantaged, probably men can too, but I think the bigger thing is to use any negative experience that’s happened to you as a learning experience. And so every time something like that has happened I don’t let it get to me, and if anything, I let it spur me on.’

I asked her what advice she would give her 13-year-old self and she laughed. ‘That it’s all going to be ok.

‘Honestly, I went through most of my career, up until three or four years ago, and I had amazing success and amazing challenges, I did incredible things, but I didn’t enjoy it anywhere near as much as I should have. I was constantly, constantly worried that it would all fall down at any moment.

‘I just wish I could go back and tell myself, you need to have confidence in yourself that it will all be ok, because you’ll just enjoy it so much more.

‘As you get older, you build up that confidence by constantly overcoming challenges. Eventually you get to the point where – I mean, my challenges now are way bigger than what I faced in the past – but I don’t freak out anymore because I know that the team around me, my inner persistence or resilience whatever you want to call it, is strong enough that no matter what happens everything will be ok.’

Inspiration is all around us

As for what the future holds and where’s she drawing inspiration?

‘The way technology moves right now is exponential. What was interesting literally two seconds ago has possibly already been surpassed. To me, that’s exciting, but it scares some people.’

She believes that the way technology is being developed and used will shift from being primarily to add efficiency to instead focusing on how to increase connectedness, especially with the long-term impacts of COVID.

‘We’re physically not going to be able to be with people that we love, work with, care for. If tech can find ways of making that less horrible, then I think you’ll win. And I think tech for enjoyment will have massive growth now.’

She said she is inspired every day by individual people and companies that are finding better ways to do things. She calls them ‘no brainers’ or ‘bullet-proof ideas’ that are better in every way than the current way.

‘I’m inspired by each and every one of them. From the high school student developing tech to deploy wifi to disaster areas using something that looks like a tree-spinner to the people finding ways to turn roads into solar power grids. There are so many cool things.

‘We can all think that the world is going to you-know-what in a hand-basket, and I think if you take a step back an focus on the opposite, it’s really quite humbling to see all the incredible things people are doing on a daily basis to make the world a better place.

‘I think we need to not lose sight of that.’

You can learn more about Nourished and to find out what stacks would be right for you on their website.