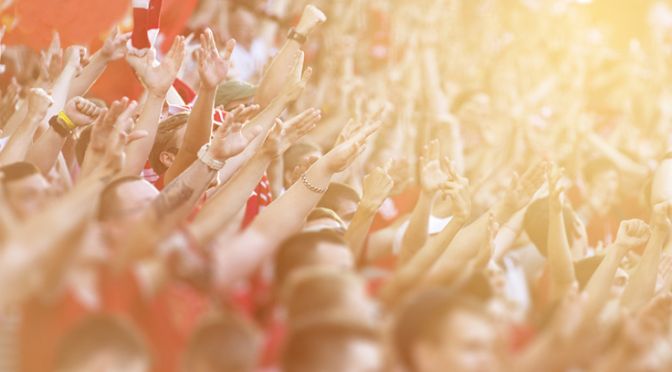 The chants can be heard all around the stadium as Salah smashes in a goal against West Ham, equalling City’s record of eighteen Premier League wins in a row.

And the beautiful game, one of the most divisive yet unifying ‘religions’ on the planet, poses the ultimate question: who are you?

What starts out as rhetorical, mocking the fans of the losing team, points to something deeper. A societal division that separates us, not just into different team colours for 90 minutes, but into an ‘us vs. them’ mentality.

It reinforces the idea of the tribe. And while tribes can bring a sense of belonging, community and security, they can also create a sense of ‘the other’ – of a marginalised group. And when we focus our attention and energy on our differences rather than our similarities, we start to see anything ‘other’ as bad.

It was early December 2019 that Manchester United’s Fred was on the receiving end of racist chants whilst walking up to take a corner in the legendary Manchester Derby. And despite the efforts of the Football Association, it’s still a prevalent and disturbing issue.

This isn’t, of course, an issue confined to the terraces. We see this mentality play out across the world and across history as an individual or group takes dominance and control over other people, animals and the planet. The results make for grim reading.

‘We’re all members of a young species…Wherever we’ve ended up, all over the world, we’re Africans under the skin. And uncovering that story, retracing the steps of our ancestors, has given me a profound sense of our common humanity: our shared past, and our shared future.’

Through history, geography and archaeology, there are a number of routes through which to discover ourselves, but genetics is the most interesting when you consider that genomes contain a record of everything that has happened to DNA since life began.

Now let’s not pretend to understand genetics to an intellectual degree, but it can unlock so much about who we are at the most basic level. In her book ‘Tamed’, Alice Roberts explores the story of how a variety of species – dogs, horses, cattle, apples, rice and humans – were domesticated.

As we transitioned from hunters-gathers to herders-farmers, we influenced the natural selection of those species and helped turn them into what they now are.

‘By pulling up the rogues, sifting out the animals that we don’t want to breed on, or even just looking after certain animals better than others, humans have become powerful agents of natural selection. We’ve roped in a great variety of plants and animals to become our allies in the game of life.’

Humankind’s ability to influence our surroundings – to become agents of change – has led to incredible advances in health, happiness and growth. But a quick look at the headlines on any given day show that it has also led to depleted resources, the destruction of ecosystems and death of many different kinds.

But what has all that got to do with football?

Despite the eye-watering exchanges of money, the camaraderie juxtaposed with the odd bout of hooliganism and vile episodes of racist chanting, football is a powerful force, uniting people from all over the world.

And therein lies a really important lesson. If we, even for a moment or two, ignore the often divisive, sometimes vile and hugely misrepresentative propaganda pumped out by what purport to be mainstream news publications and channels, and focus on our many similarities, we can ultimately be as one tribe, one species, one race, one community.

And just imagine the impact that we can have on our lives and the planet.