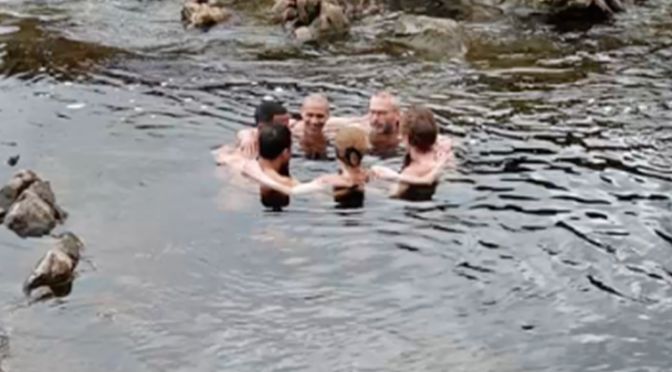 Take My Breath Away

Culture & Celebrity
1st May 2019 By: The Planet Shine
SHARE

Would you jump into icy cold water to reconnect with your breath?

We journeyed to the beautiful Alladale Wilderness Reserve in the Highlands of Scotland, where we met Wim Hof Method expert, Allan Brownlie.

Wim Hof, also known as the Iceman, has become big news of late and in a time of disconnection with both the natural world and our inner selves, his method is much needed. At the age of 17, Wim was walking alone in a park in Amsterdam and decided to immerse himself in a hidden lake of freezing cold water. He noticed that all the clutter and chatter in his mind ceased, and he felt a deep and clear connection with his inner self, his soul. This became an annual ritual and led Wim to investigate the impact of breathing and the cold on the mind and body.

“The Cold Is An Absolute Doorway To The Soul.”

Over the last decade, Wim has set himself a number of extreme challenges, including climbing Everest, in nothing but a pair of shorts and shoes. He has been the subject of many scientific trials, each of which has astounded researchers. Wim now teaches his methods throughout the world – which is how Allan came to train under him – and is convinced that they could hold the key to easing both mental and physical disease.

My name is Allan Brownlie; I’m a Wim Hof Method instructor. The Wim Hof Method is based on three components, deep conscious breathing, gradual cold exposure and commitment. They came from a guy called Wim Hof, the reason the method is known to the, kind of, Western world is because he’s done all these world records in cold water, icy water.

There’s been lots of scientific research behind the method so a lot people like to here that and yeah that’s why it’s becoming so popular and it’s great fun as well.

So there’s benefits for the mind and the body, so the for the body a better circulation, you have a stronger immune system, you have this mind-body connection as it just seems right, the body just seems to work more there’s the flow of oxygen around the body is better, you should feel like you breathe better, you breathe deeper you’ll not breathe shallow and better focus, more empathy for others, a connection with nature, there is so so many it’s just dependent where you want to go with it.

It’s fantastic to be in Alladale, doing it in a fantastic location, you really get that connection with nature and a sense of there’s no distractions so if you can really hone in on the techniques and really own them.

For me personally I just feel like it’s I truly am who I am because I understand that I’m part of nature. You discover your breath, get cold and yeah it’s nice, it’s a nice feeling and they’re nice techniques as well to do.