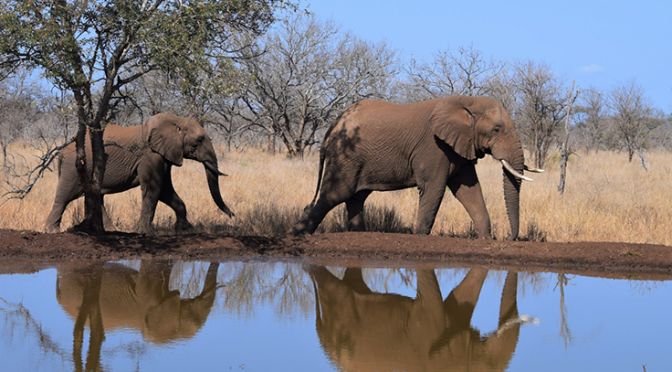 ‘Each elephant is a mother, a brother or a sister. A friend…’

On World Elephant Day, we look at the beauty and majesty of a species under threat

Dr Vicky Boult has many anecdotes about elephants. But one of her favourites comes from a South African conservationist – Lawrence Anthony – and is about the matriarch of the Thula Thula elephants in Zululand. Her name is Nana.

‘Each morning, Nana would take herself aside from her family and would stand in silence, gently flapping her ears and swivelling the tip of her trunk. Nana was busy picking up the latest ‘news’ across Thula Thula.’

Using her sensitive trunk, Nana was scanning the air for obituaries to discover who had died recently. She then turned to the births followed by the weather. And finally to the elephant updates from distant tribes.

‘Having “read the newspaper”, Nana would use her many years of experience to decide on the course of action for day, ensuring her family were kept happy and healthy.’

There are many stories that showcase how smart and social elephants are, what brilliant memories they have and the way that they demonstrate empathy and mourn their dead.

They’re extraordinary creatures. They are also essential to the ecosystems they live in.

Vicky calls them a keystone species

They recycle nutrients and disperse seeds as the feed and move around the landscape. They help maintain a delicate balance between the grasslands and woodlands, and they can help ‘increase the capacity of forests to remove CO2 from the atmosphere’.

Elephants are also a huge draw for tourism. But that one is a bit of a double-edge sword. They can draw visitors to animal sanctuaries and wildlife preserves, which in turn boost local economies, support local families and promote economic wellbeing.

But when this crosses the line into exploitation for human amusement, elephants can suffer.

Alicia Silverstone recently drew attention to the Save Elephant Foundation and Elephant Nature Park in Thailand that is working to help save elephants out of trekking camps.

Trekking – the practice of allowing tourists to ride elephants – leads to ‘force breeding of captive elephants and a brutal practice called phajaan or elephant crushing, where elephants are taken from their mothers, confined to a small space, and abused with bullhooks. They are starved and deprived of sleep in order to make them submissive to humans. Once this barbaric training is complete and the elephant’s spirit is broken they will then be used in the trekking industry. Elephants live in socially complex herds and need social interaction with other elephants but in the trekking camps, they are kept solitary.’

Organisations like Save Elephant Foundation and Elephant Nature Park are working to educate tourists as to the abuse the elephants suffer as well as working with elephant owners and keepers to help them transition ‘toward an ethical and sanctuary-based model where elephant welfare is a priority. The progress is undeniable as SEF has engaged and transitioned more than 30 cruel trekking and performance camps to ethical programs where elephants are able to live their lives with dignity and respect.’

The importance of World Elephant Day

12 August is World Elephant Day, and it was founded in 2012 by Patricia Sims from Canada. It is a day when organisations and individuals work to raise global awareness of the threats elephants face.

When the day was first introduced in 2012, Vicky notes that poaching elephants for their ivory tusks led to 36,000 deaths every year – that’s 1 elephant being killed every 15 minutes!

Thankfully, poaching is on the decline, but Vicky explains that there are other threats facing elephants besides illegal poaching.

‘The global human population is growing, and with it, the amount of land required for human activities increases. Across Africa and Asia, areas once home to elephants are being converted for farmland, settlements and infrastructure. In doing so, elephants are squeezed into smaller and increasingly isolated fragments of land, where food and water are limited, and opportunities to move elsewhere are blocked by human-dominated landscapes.

‘In these fragments, elephants are vulnerable to changing climates which may alter the resources available to elephants. If elephants try to leave, they often face conflict with people; elephants eat crops, damage infrastructure and can injure or kill people, and in retaliation, people seek to eliminate the offending individuals.’

There are only 40,000 elephants left in Asia and 400,000 left in Africa. Those are not big numbers and there is a real risk that we could see elephant numbers decline even further in the decades to come. So when a mysterious tragedy strikes, like it did earlier this year, we feel the loss keenly.

In March, hundreds of elephants were found dead in Botswana, where a third of African’s elephants live. But the manner of death is what puzzles Vicky and the other scientists and conservationists interested in the case.

‘Of those discovered so far, some lay on their knees and faces (rather than on their side), suggesting sudden death, although there are also reports of elephants looking disoriented and even walking in circles. The tusks of the dead elephants are still in place and, as yet, no other species have died under similar circumstances.’

Given that the tusks were in place, poaching seems unlikely. And the fact that no other animals have died in similar circumstances means it’s unlikely that the watering sources were poisoned.

But whilst samples have been sent to labs in several countries, the results are inconclusive – we still don’t know what has killed the elephants.

‘And when an elephant is lost, it takes with it a type of knowledge that cannot be read in books nor regained quickly, but is gathered over many decades through many experiences. Elephants themselves know this, they understand this great loss and they mourn. They absolutely share the same emotions we do.

We cannot deny them this and I believe it is even more reason help save each and every elephant.’

So what can you do this World Elephant Day?

Pressure your government to ban the domestic trade of ivory

Support organisations working toward human-elephant coexistence, like Save Elephant Foundation