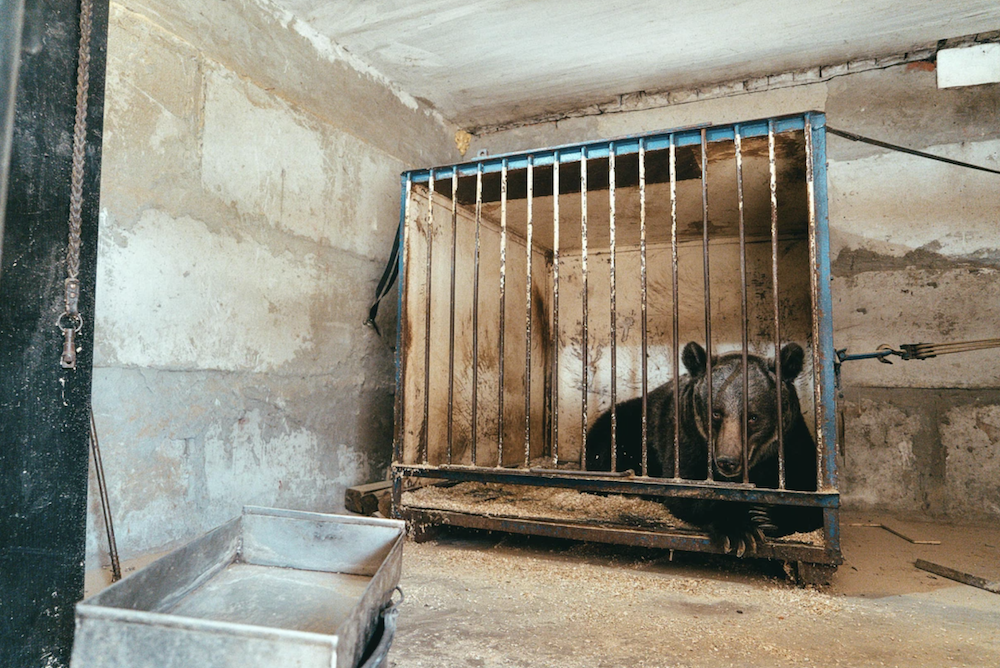 See how life is changing for Ukranian circus bear, Jamoblina.

There’s no denying it’s been a tough year. Even so, we have often overlooked the effect of the pandemic on animals. Many people abandoned their pets when fleeing from early virus hotspots. Others got their hands on a pet so that they’d have company, or an excuse to leave the house. However, many of these didn’t actually think about whether they could look after an animal long-term.

Similarly, restrictions on travel and movement have impacted animal rescue operations. In addition, animals kept for ‘entertainment purposes’ have seen their prospects become as dim as the arenas in which they’d usually appear.

Jambolina was born in a Crimean zoo in 2009. The zoo sold her to a circus that same year, where she was used as an attraction to perform tricks. Covid-19 restrictions and closures put a halt to this in March. Since then, she has lived in a metal box with little room to move or stand upright.

Although the private keeping of bears has been regulated by law in Ukraine since 2011, the International Organisation for the Protection of Animals says that the legislation is inadequate. Not only do the authorities fail to implement requirements sufficiently but additionally, they frequently fail to issue penalties.

According to Ukrainian law, certain criteria are required for the keeping of bears. These include: proof that the bear is not wild, but farmed. Additionally, the authorities must issue official permissions. Defined standards of husbandry are also a factor; however, this is often difficult to regulate. Enclosure dimension requirements for an adult bear are at least 3m high and 30m².

The Ukrainian Parliament is currently considering an initiative to ban wildlife in circuses.

International animal welfare and respect organisation Four Paws is instrumental in the relocation of Jambolina. They had originally hoped to rehome the bear in Ukraine, but insufficient space in a sanctuary already housing 22 bears required them to look further afield. Therefore, Jambolina’s new home will be in glorious Switzerland, at the Arosa Bear Sanctuary. This sanctuary covers 2.8 acres of wilderness, from mountains and streams, to forests and shrublands.

The sanctuary is located is Arosa, an Alpine resort in the Swiss canton of Graubünden. A joint project between FOUR PAWS, Arosa Tourism and the Arosa Mountain Railway Company, it opened in 2018, after eight years of planning.

The first bear to find a home there was Napa, a former circus bear from Serbia. In 2019, two more circus bears, Amelia and Meimo, came to Arosa from Albania. Later that year, all three of the bears were sociable enough to share their space with one another. Sadly, Napa’s severe epilepsy and its impact on his quality of life meant that the sanctuary had to say goodbye to him in November 2020.

The sanctuary is currently closed, but due to open again in 2021. Visitors can observe the bears from a large viewing platform, as well as from the sanctuary’s adventure path. Suspended above ground, with its highest point 6 metres, the wooden path is also wheelchair accessible.